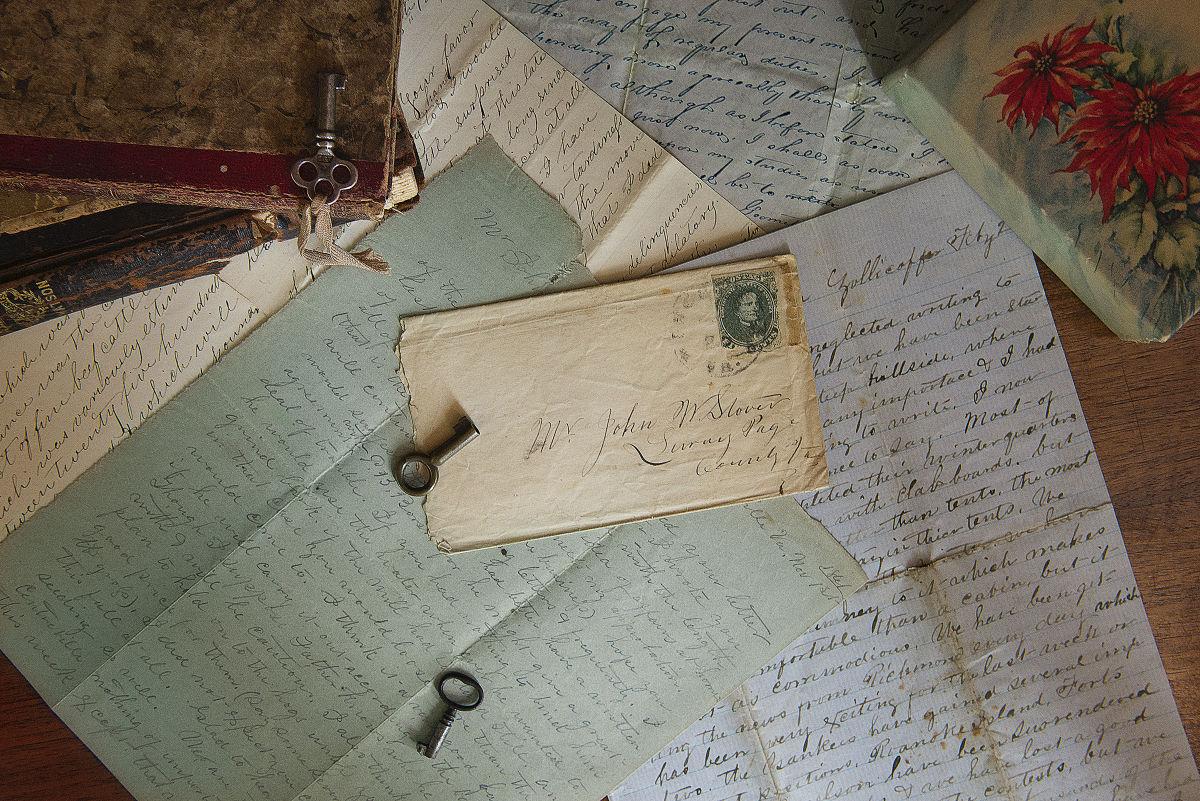 The Coryells found 12 letters from ancestors Joseph Franklin Stover and John William Stover that were written from the Civil War battlefield. 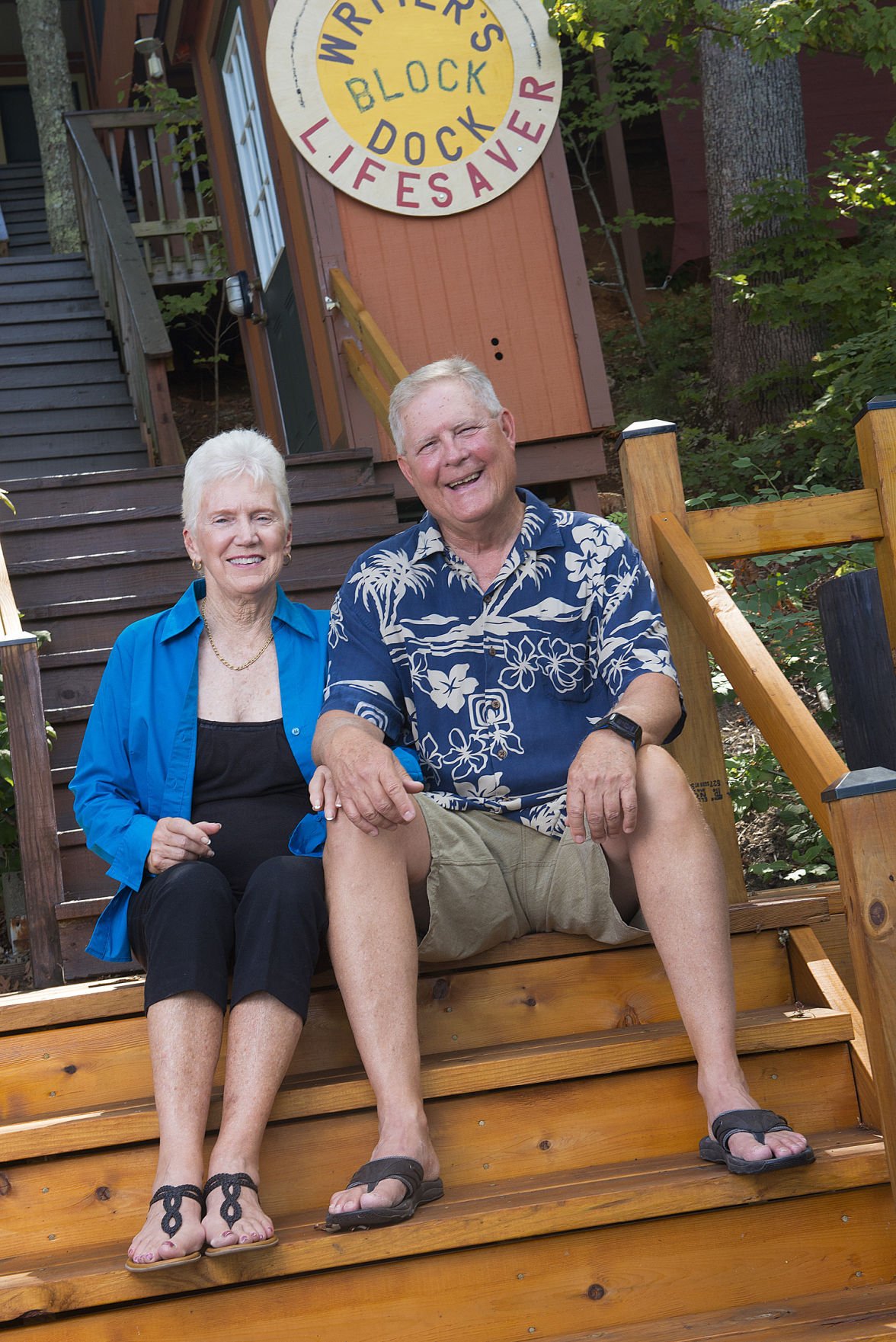 Susan and Ned Coryell, Fairfax County natives who now live in Huddleston, were clearing out her house when they discovered the Civil War letters. 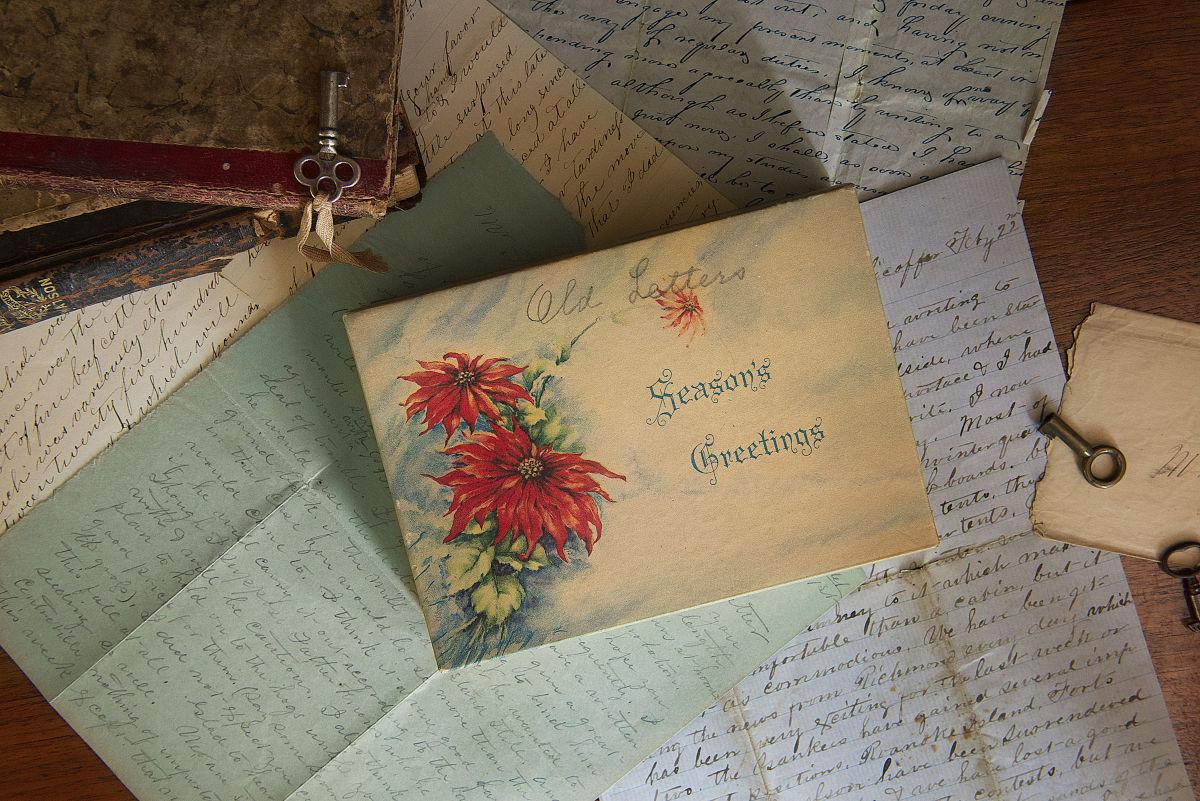 The Coryells' Civil War letters were found in this box, which was nearly tossed in the trash during a move.

Ned and Susan Coryell almost threw away the little cardboard box. It was just an old greeting card box, tattered and worn, tucked away in a drawer at Ned’s mother’s house. But on the box, in faded pencil, were the words “Old Letters.” Ned recognized his mother’s handwriting and opened the box.

In it he found a family treasure.

The box contained 12 neatly folded letters, written during the Civil War by Ned’s great-great-grandfather, Joseph Franklin Stover, and Stover’s brother, John William Stover, both Confederate soldiers. Most of the letters were written from the field to family members in Page County and contain descriptions of battles, marches and camp conditions, and news of friends. The box also contained an 1863 letter from a Washington College student to his cousin, who may have been a member of the Stover family, and Joseph Stover’s disability discharge.

The letters amazed them.

“When I opened this box and read a letter for the first time, it was like it had been written three days ago,” Ned Coryell said.

Joseph Stover, who wrote nine of the letters, joined the 33rd Virginia Infantry, part of the Stonewall Brigade, in 1861 and was seriously wounded in 1862. John Stover, the writer of three of the letters, was a member of Turner Ashby’s 7th Virginia Cavalry.

Although Ned Coryell knew that his great-great-grandfather had been wounded in the Civil War and had suffered from the wound the rest of his life, he did not know the letters existed until his mother died. The Coryells, Fairfax County natives who now live in Huddleston, were clearing out her house when they discovered the letters.

“You can almost follow the path of the war” through the letters, Susan Coryell said.

On Aug. 25, 1861, Joseph Stover wrote from Camp Harman, east of Centreville, to his sister Annie describing a march to Fairfax Courthouse to fight Union troops. The battle did not take place, and the 33rd Virginia returned to Camp Harman, having marched 12 miles. “So we had our tramp for nothing,” Joseph Stover wrote. “I can not finish letter as we have just now order to march. All is hurry now again. Goodbye to all. I may never see you again but hope for the best.”

Returning from that march after only 2 miles, Joseph Stover added to the letter, asking his sister to send him a coat at the first opportunity as nights were cool.

Stover wrote to Annie again Sept. 4, saying he sat writing in his tent with his knapsack on his knees after returning from drill. “[W]hilest we were out we hear the ‘war dogs howling’ (as we call them) down in the direction of Alexandria,” he wrote.

On Nov. 1, Joseph Stover wrote to his brother John, telling him he was pleased with the way John was conducting business at the family farm near Luray. “I also think it a good plan to hold onto the hogs until you can get a good price for them (say some seven or eight cents per lb gross),” he suggested.

Within days, things were beginning to heat up for the 33rd Virginia. Later in November, Joseph Stover wrote to Annie again: “I did not get to see any of the Yankees, although we were pretty close to them. Could hear their Drums quite plainly and see their Balloon ascend every day. ... [It] went up to an enormous height & appeared when in the midst of a cloud like a blazing star.”

The regiment had just received orders to pack up and move, Stover told his sister.

On Nov. 17 he wrote to brother John Stover that the regiment was encamped at Kernstown, and the weather was very cold: “The woods here belongs to a widow Lady who has been so stingy with her wood that she would suffer from cold. & now the soldiers are slaying it at the rate of about fifty loads per day,” he wrote.

On Jan. 8, 1862, in the midst of the Romney campaign, Joseph Stover wrote to his younger brother David, praising his handwriting and describing the strenuous marching his unit was enduring. “Our brigade commanded by Gen. Garnett left camp Stephenson near Winchester at an early hour New Year’s morning & marched about 18 miles in a north westerly direction & camped for the first night,” he wrote.

Days of marching and skirmishing in freezing weather followed.

“[A] great many of our poor fellows have suffered severely from cold and hunger. Two poor fellows froze to death on the Potomac whiles we were there,” he wrote.

It was impossible to get the supply wagons to the camps, because of bad roads, he wrote, comparing their situation to the hardships of the American Revolution: “We can now begin to realize the sufferings of the revolutionary soldier. But I suppose we are better clad than they were.”

The people living in the area through which they are marching, about 20 miles west of Martinsburg, are mostly Union sympathizers, he wrote, and so their cattle and winter stores are being confiscated to feed the Confederates. “I have seen more of the horrors of war in the last week than I saw in the six months before. Families eaten out of house & home & left in a pitiful condition,” Joseph Stover told his brother.

On March 23, 1862, he was wounded at Kernstown, sustaining a wound to his thigh that never healed properly and caused him to limp for the remaining 39 years of his life. Although Joseph Stover had hoped to hire a substitute for his brother John, in case he was drafted into the army, John joined the 7th Virginia Cavalry.

John wrote to Joseph from camp in Greenbrier County near Lewisburg: “I guess we have travelled a thousand miles. . . We burned the bridges from Oakland to Cairo on the Baltimore and Ohio railrode. We destroyed a fine iron bridge at Fairmount which cost several hundred thousand dollars. . . I am still riding Billey, although he is tired and his back is soar.”

John survived the war, as did David Stover, who also joined the 7th Virginia Cavalry.

Though the letters describe events in Ned Coryell’s family, they hit home with Susan Coryell as well. When they found the letters, she was halfway through the writing of her second Southern Gothic mystery, “Beneath the Stones,” a sequel to “A Red, Red Rose.” Both books are set at fictional Moore Mountain Lake and involve a Southwest Virginia family with ties to the Civil War.

She was surprised to realize how well the letters fit into the plot she had constructed for “Beneath the Stones.” She had already used a Stover family home in Page County -- a German “Flurkuechenhaus” with a vaulted cellar -- as the basis for a setting in the novel. Characters in the book find that their lives are affected by the actions of ancestors, two cousins who served in the Civil War.

The letters helped flesh out the characters of the Civil War soldiers in the book, Susan Coryell said. She used excerpts from Joseph Stover’s letters as parts of fictional letters, including one in which a soldier expresses his homesickness to his sister: “It is now night & I am setting in my tent with my knapsack on my knees writing. Our Fifer is passing away the tedious hours by playing on his flute. The soft music flows gently with mournful cadences upon the evening breeze which reminds me of my much loved home & the loved ones I left there.”

The Stover letters helped to cement one of the book’s major themes, Susan Coryell said.

“We understand ourselves better when we know where we came from and what happened in the past,” she said. “There are layers of history that make us what we are. And to think we almost tossed [the letters] out.”

Planning is underway for a residential development near Bridgewater Plaza. The Willard Companies is proposing the construction of 42 homes on …

Hamadeh and another man were arrested at Smith Mountain Lake Community Park in 2019 after two juveniles told lifeguards a woman was being attacked on a nearby beach.

Most species of fish have spawned. Water temperature will be in the 70s to near 80 by the end of the month. Night will be the best time for fi…

Lyrics on the Lake 2021 schedule

Lyrics on the Lake is set to return this week after missing last year due to the pandemic. Here is a schedule of this year’s performances.

What do you think of no-wakesurfing zones?

Juneteenth celebration to be held virtually this year

Booker T. Washington National Monument will be celebrating Juneteenth virtually this year. While the park will be open, multiple events will b…

The Rotary Club of SML’s first golf tournament was held earlier this year with tremendous support from sponsors and players alike.

The Coryells found 12 letters from ancestors Joseph Franklin Stover and John William Stover that were written from the Civil War battlefield.

Susan and Ned Coryell, Fairfax County natives who now live in Huddleston, were clearing out her house when they discovered the Civil War letters.

The Coryells' Civil War letters were found in this box, which was nearly tossed in the trash during a move.