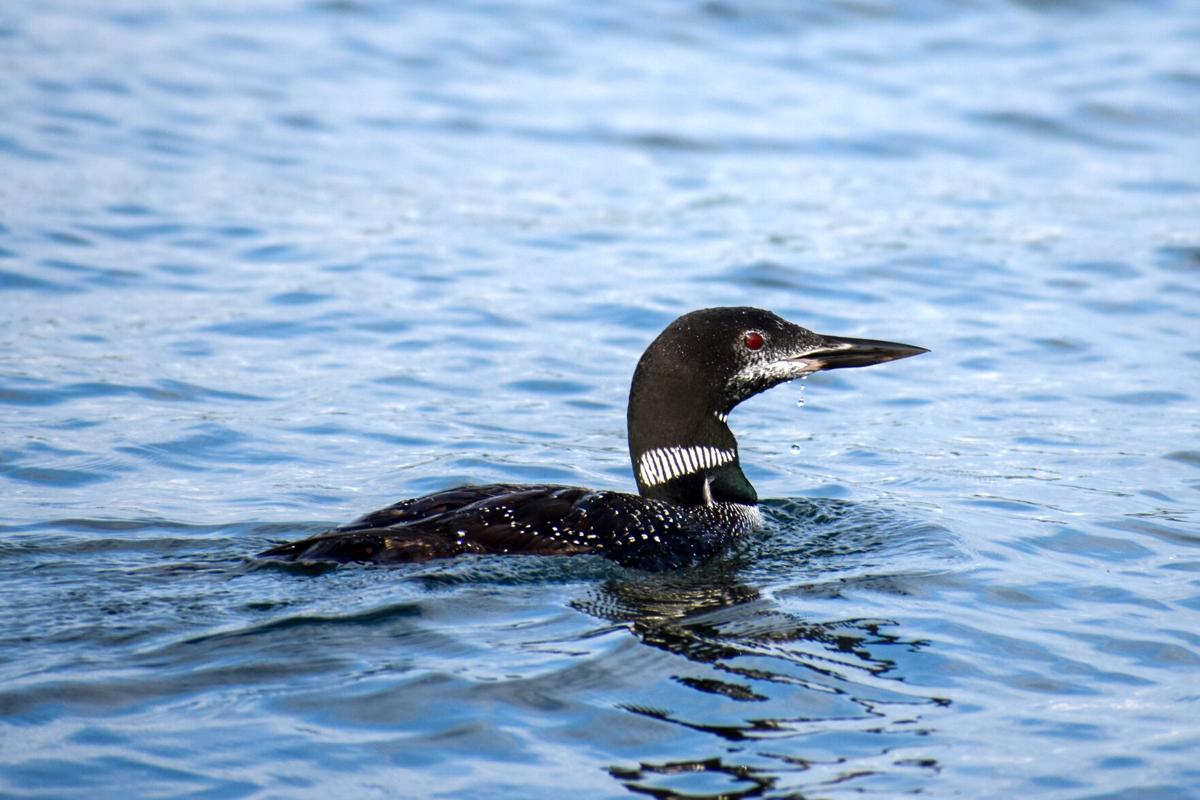 Loons need to run between 30 yards and a quarter-mile before they can take off, depending on the wind. They are also agile swimmers that dive totally underwater to fish. 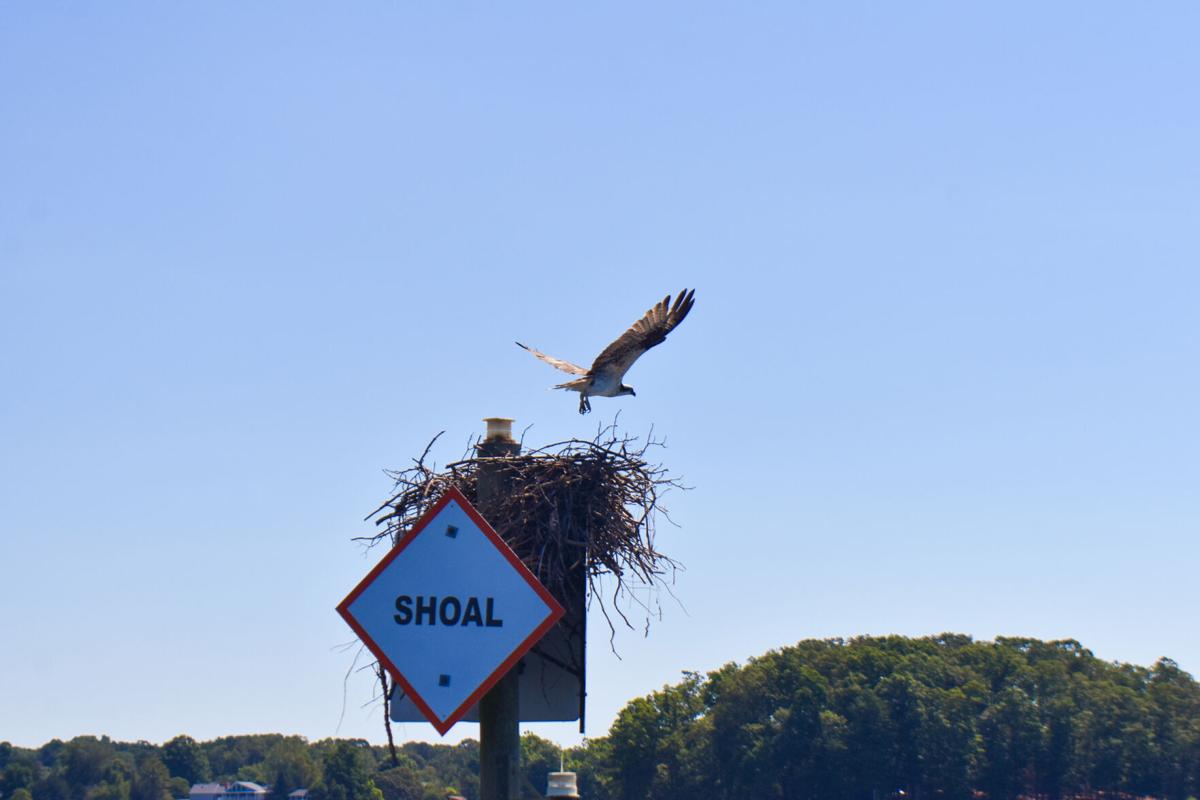 Osprey live in nests atop buoys or in treetops along the lake's shore. 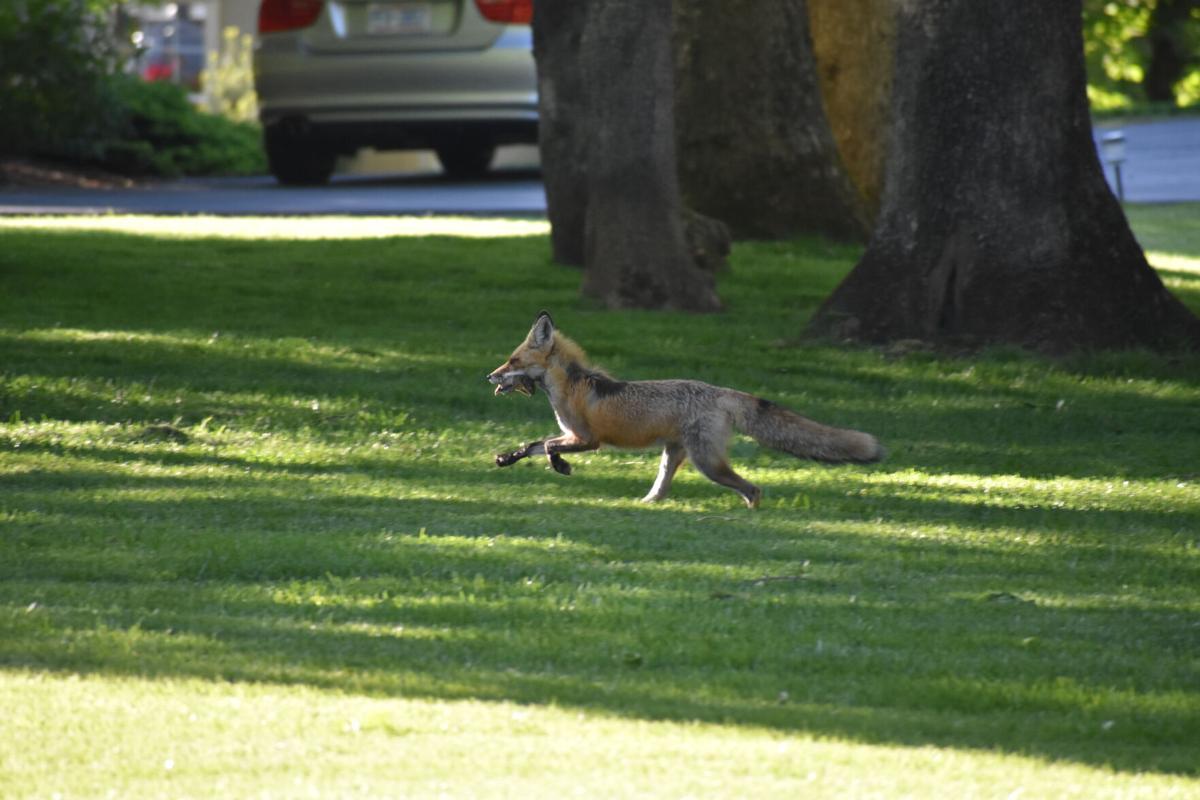 Gray foxes are one of only two canines that can climb trees. They have shorter legs than their red cousins and their tail is edged in black fur instead of white. 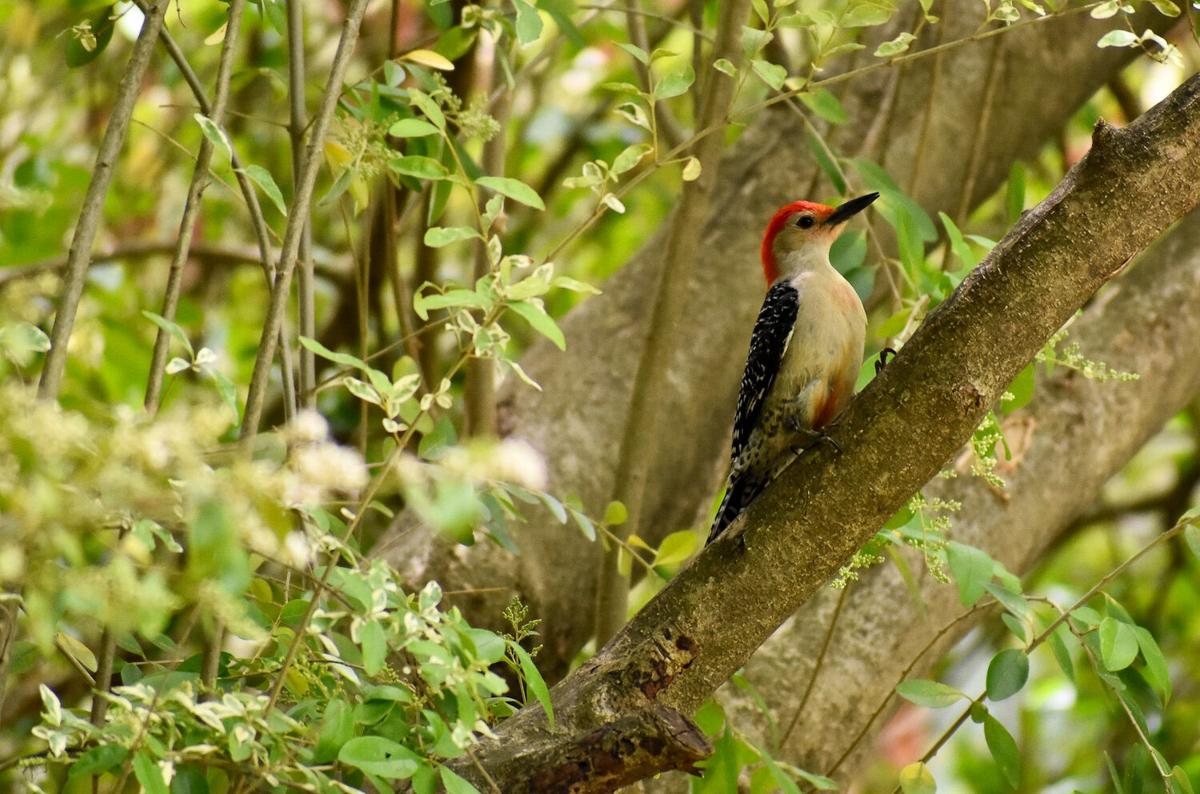 The red-bellied woodpecker can stick out its tongue 2 inches past its beak. They also store food for winter, most often in crack in tree bark or fence posts.

Story and photography by Ashley Kairis

It’s time to get to know the neighbors a bit better. No, not those neighbors — the wild creatures that swim the waters, run the shoreline and soar above Smith Mountain Lake.

These co-habitants of Bedford, Franklin and Pittsylvania counties range from common full-time residents like white-tail deer and largemouth bass to more elusive tenants such as bobcats and migrating loons.

With its water supply, diverse habitat and bounty of open spaces, the SML area has enough wildlife to fill an entire book. This, with the help of an experienced Virginia Department of Wildlife Resources District Biologist, Dan Lovelace, is a snapshot of the wildlife you may see or hear at the lake throughout the year.

Most lake dwellers are all too familiar with the white-tailed deer. These four-legged driving hazards can be beautiful to observe and also garner high interest for hunters.

As for their eating habits, these mammals are the largest herbivore in the commonwealth. This helps explain their interest in many of the gardens and landscaping around the lake.

Keep in mind as you drive around the lake, white-tailed deer tend to be the most active during their breeding season from October to December.

Two other common mammals a bit more on the predatory side are the red and eastern gray foxes. On initial sighting, these sly hunters appear to be of similar build to small dogs, but a closer look gives away their pointy ears and bushy tail.

Fox breeding season is December through February with about four to seven pups born into each new litter around late March or early April. Generally, these animals are known to be monogamous, non-migratory and nocturnal in nature. Foxes also have a sophisticated bag of tricks to lose larger predators like backtracking and running along fence posts to not produce tracks.

Bobcats, Coyotes and Bears (Oh My!)

Virginia is also home to some large, predatory and more rare-to-spot wildlife such as bobcats, coyotes and bears. In recent years, Lovelace says the bear population across the state has been rising.

“Occasionally, you’ll have bears swimming out in the middle of the lake,” Lovelace said. “They are good swimmers and you may see them trying to get from one side to the other.”

The number of bears spotted near lake houses tends to escalate in the spring as bears come out of their dens in search of easy food. They like to forage in cornfields, find bee hives and livestock pens, and are even attracted to bird feeders for an easy meal.

Lovelace recommends taking down these feeders around early April to avoid these uninvited guests and the potential of returning visits to trash bins. As a general rule, give bears their space and never feed them. No matter how cute they appear, these furry hibernators can cause some serious damage in their pursuit of a meal.

Wildlife On and In the Water

While paddling the coves or trolling the main channel for a catch, boaters may catch a glimpse of the various fish species and surface-swimming critters like muskrats and beavers.

As a premier fishery of Virginia, the lake has a healthy variety of species with the most sought after by anglers being black bass. Largemouth bass are the most common and far outnumber the smallmouth bass.

Most bass are found in 10 to 20 feet of water when the fish are not near the shorelines during their spawning season. According to DWR, smallmouth bass are more prevalent in the lower portion of the reservoir, and the highest densities of largemouth bass are found as you head away from the dam.

Commonly known simply as “stripers,” the striped bass population is the second most popular sport fish at the lake. Stripers tend to travel in schools and feed in open water on smaller schooling fish, such as gizzard shad.

Sitting at any lakeside restaurant, it’s all but guaranteed that you’ll spot carp. These are large, bottom-feeding fish with a naturally omnivorous diet, though many lake visitors tend to push that definition with popcorn and restaurant grub.

There’s also a good population of yellow perch, known for their striking golden yellow and green bodies with orange-tinted fins and about six to eight dark, vertical bands down their sides.

More common creatures you may hook into around the lake are catfish or black crappie.

While they are a much less frequent catch, some musky and walleye also populate the waters.

“Our fisheries biologists have worked really hard to establish and maintain the fish populations in Smith Mountain Lake. Walleye is one that they’ve been trying to introduce and people might figure out how to catch them,” Lovelace said.

As for musky, the lake is stocked with fingerlings yearly but is not known to produce large numbers of them.

Other swimmers that don’t require fishing gear to spot are the fairly common beaver, otter and muskrats, though they can get a bad rep for being nuisances.

According to DWR, beavers are North America’s largest rodent, and the damage caused by them in the Southeast is estimated in the millions of dollars annually. These typically weigh 30 to 40 pounds and have 10-inch-long tails.

Muskrats can look similar to beavers while swimming but are actually much smaller at about 2 to 4 pounds with a rat-like tail and a less than appealing odor.

Otters are almost entirely aquatic animals, and they are most abundant in the lower parts of streams and rivers. Their secretive and mostly-nocturnal nature makes them elusive and difficult to observe, but you may catch them while searching for food.

Fishermen particularly like otters as they prey on non-game fish, slow-moving fish and the bottom-dwelling rough fish.

Wildlife in the Sky

Given that about 75% of all birds in North America migrate each year, they present the largest variety of wildlife that can be seen at SML.

The sizeable nests spotted in trees and atop buoys around the lake mostly belong to osprey and eagles, both bald and golden.

Ospreys in particular have piqued bird-watching interest with their live camera appearances from the Smith Mountain Lake State Park nest cam. These are frequent-fliers to SML, often staying from about March to October. In the winter months, a great majority migrate to the West Indies or Central and South America.

Eagle sightings are also frequently reported around the lake, particularly in winter. These birds mate for life, returning to their nest year after year. Little eaglets usually appear in the area around April as their breeding season is early, starting in February.

Living up to their reputation of the most graceful birds to spot around the lake are ones in the heron family. Commonly seen is the great blue heron, but you may also spot a couple of egrets and some feathered friends that fly in from the coast like seagulls.

Even without a bird feeder in the yard, lake residents can get a front-row seat to an amazing variety of songbirds. One of the most vibrant is the Virginia state bird, the northern cardinal. Outside of their appearance, cardinals are known for their variety of chirping patterns.

One bird that’s just about impossible to miss is the area’s woodpeckers. While eight different members of the woodpecker family can be spotted across the state, the most common around SML are the red-bellied and red-headed kind.

These full-time area residents are known for their outgoing personality, often producing loud enough vocals to be heard through the neighborhood.

These state-protected, non-game birds can be a nuisance when drilling into trees, but it’s quite interesting why they do it. Turns out, they make rows of small storage spots to create caches of food where they might wedge a single nut or seed into each one.

A rarer find that Lovelace has seen himself but doesn’t often get reports of is the common loon, a bird that is known to primarily live in Canada, Alaska and a few northern states.

Lovelace recalls spotting a few common loons on the eastern shore of the lake. It’s highly uncommon to see, but on occasion, birds like loons will stop to take in the sights of Smith Mountain Lake.

Owls might also qualify as an elusive species to spot, particularly the smaller ones such as the eastern screech owl or northern saw-whet owl.

Keeping Smith Mountain Lake a welcoming and safe environment for all — well, maybe most — wildlife is certainly a community effort. A great start is to think of the species that are and are not welcomed on a property, then take steps to enforce it.

Lovelace says intentional property management and landscaping can go a long way to make yards more attractive for different species that are of interest to landowners. Typically, this would be to encourage butterflies and songbirds, but those wanting to could also create an environment conducive to rabbits and deer.

Natural cover and using native plants and shrubs is more beneficial for the wildlife versus exotic and ornamental options. Going with native vegetation surely helps the pollinators, birds and butterflies.

As for the shorelines, it’s important to keep those protected and cleaned as well so that all of the lake’s wildlife can not only survive, but flourish and thrive.

What installing a pool does to the value of your home

Most important things to know about fire insurance

Most important things to know about fire insurance

Tips to treat crepey skin you should have started yesterday

Tips to treat crepey skin you should have started yesterday

PennyWise podcast: Tips to Help You Save Money on Your Next Move

Ten tips, ranging from moving estimates and why the lowest bid isn't always the best, to when packing strategically can really pay off.

Loons need to run between 30 yards and a quarter-mile before they can take off, depending on the wind. They are also agile swimmers that dive totally underwater to fish.

Osprey live in nests atop buoys or in treetops along the lake's shore.

Gray foxes are one of only two canines that can climb trees. They have shorter legs than their red cousins and their tail is edged in black fur instead of white.

The red-bellied woodpecker can stick out its tongue 2 inches past its beak. They also store food for winter, most often in crack in tree bark or fence posts.