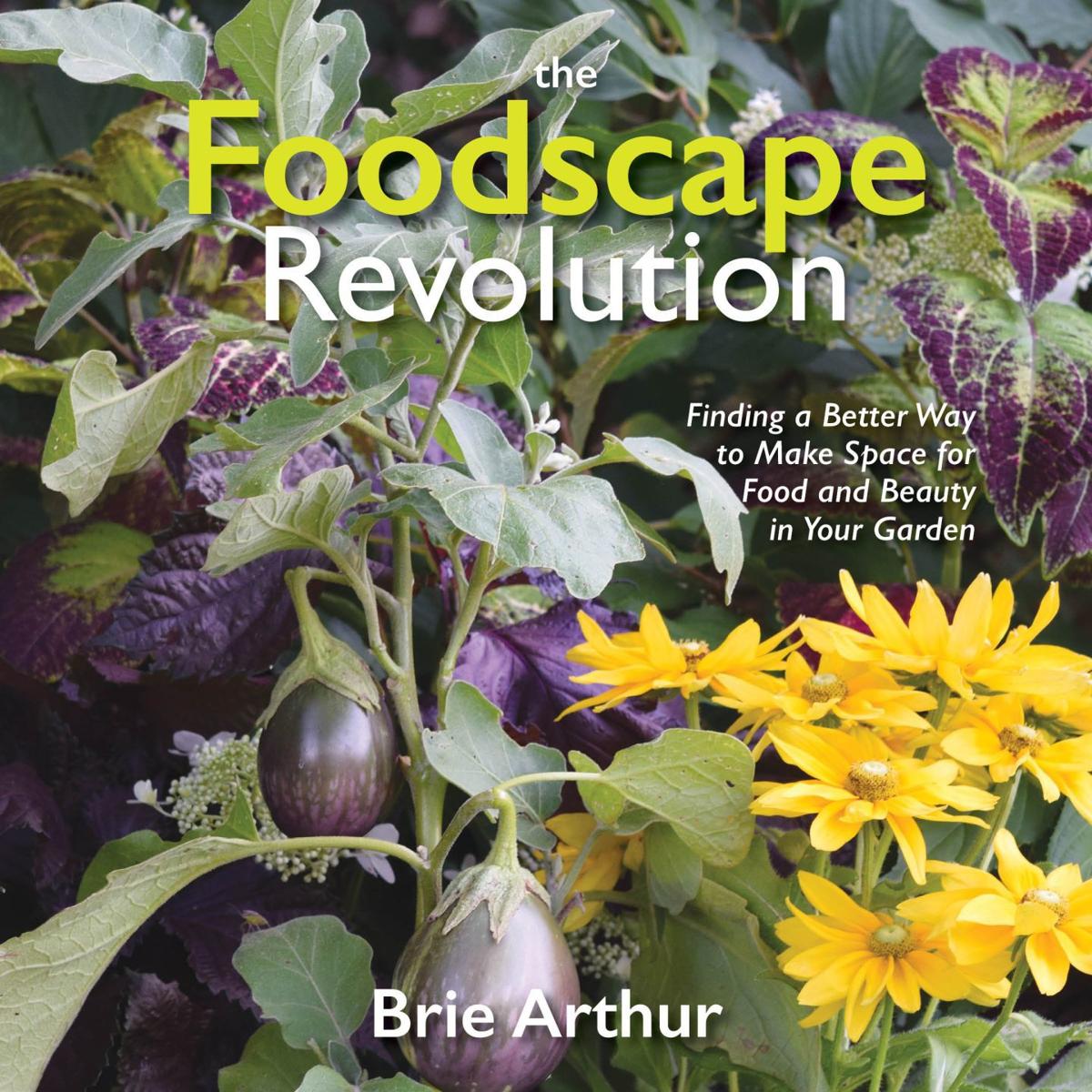 The Foodscape Revolution: Finding a Better Way to Make Space for Food and Beauty in Your Garden 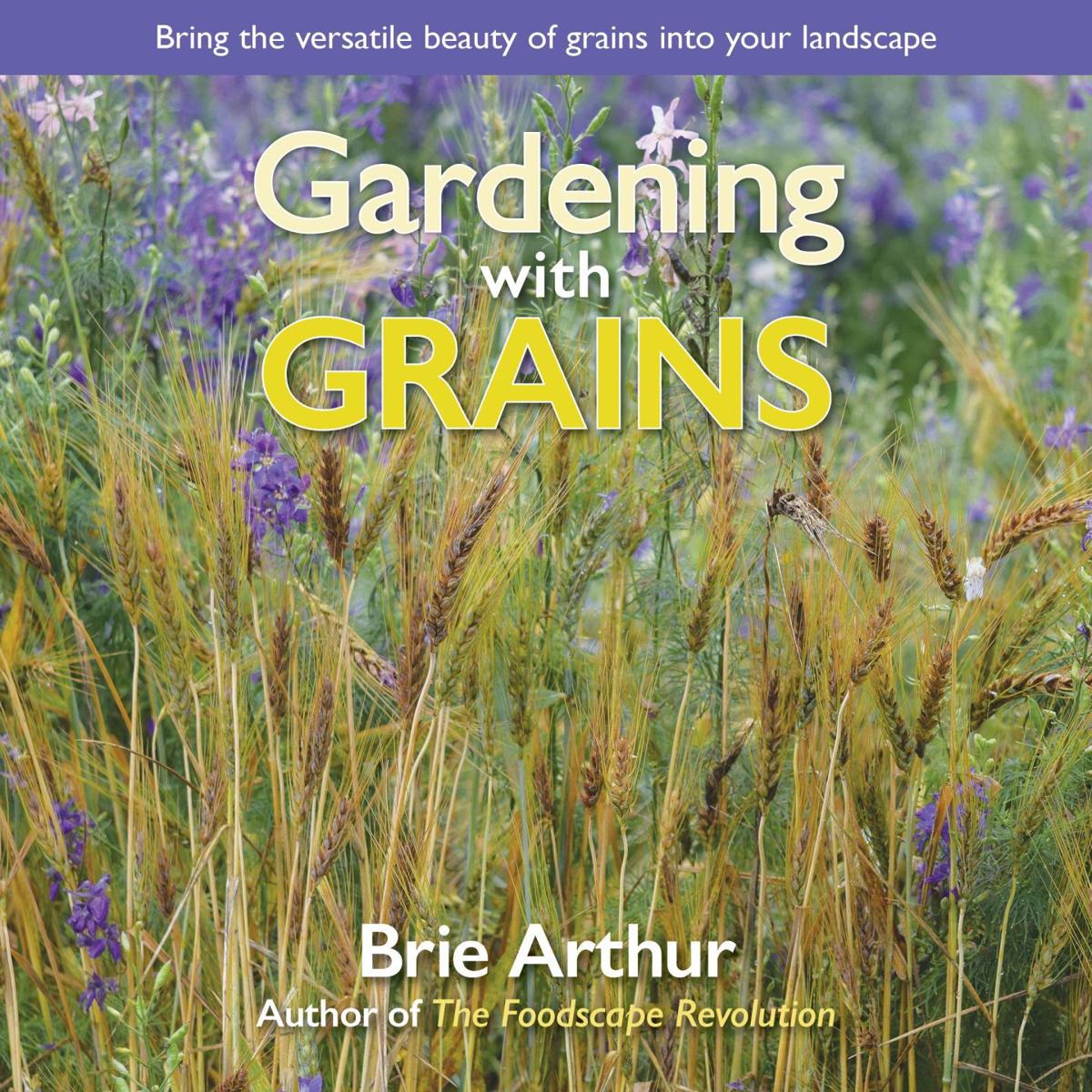 Gardening with Grains: Bring the Versatile Beauty of Grains to Your Edible Landscape 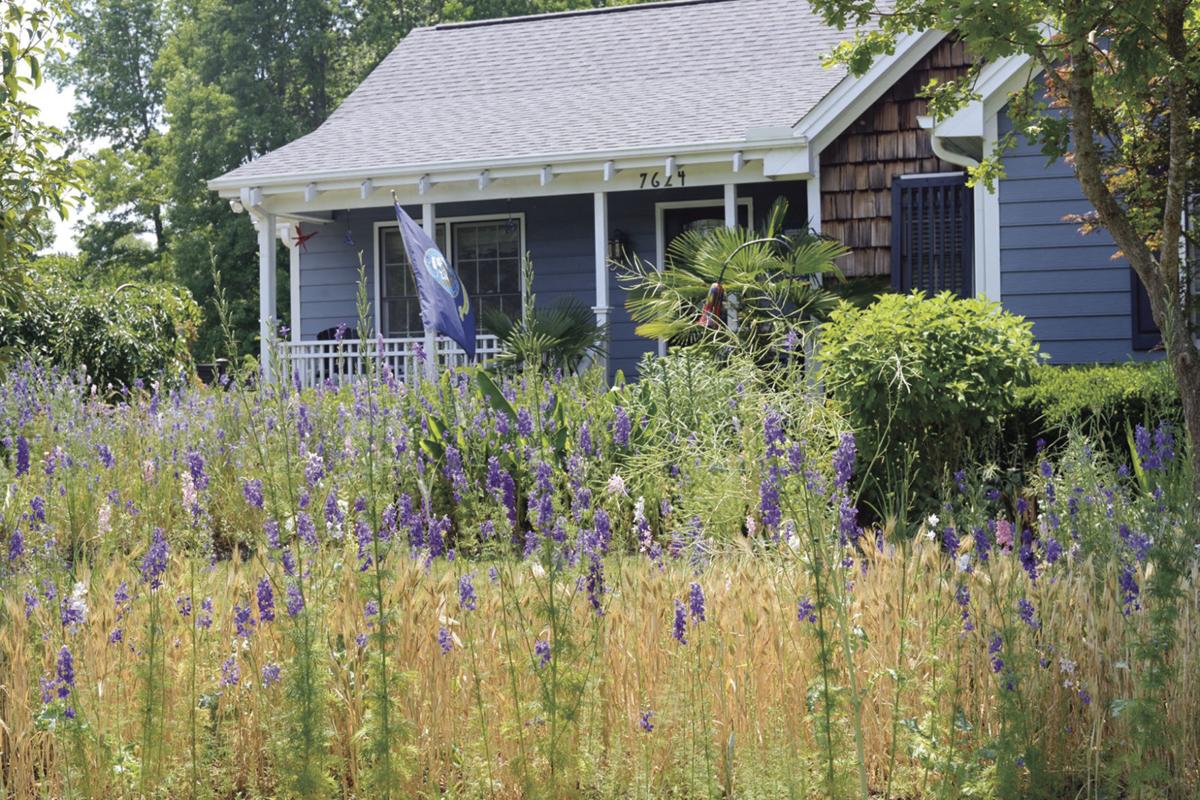 Brie Arthur’s front garden in spring includes two beautiful swaths of emmer wheat intermingled with self-sown larkspur and poppies. Arthur is pioneering the idea of growing grains in the garden as both ornamental and edible plants. 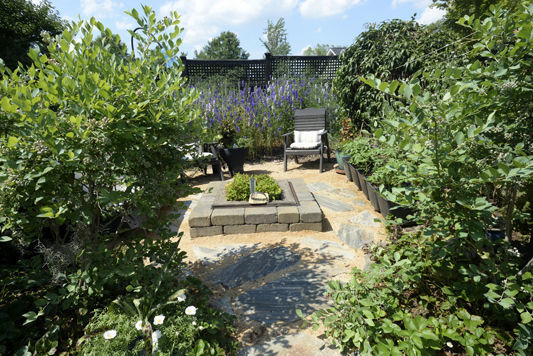 The “walls” of this private garden room are fruiting blueberry shrubs and rows of potted indeterminate tomatoes that grow tall and continue to fruit until frost cuts down the plants. The celosia growing in the fire pit will bloom in bright red “flames,” giving the effect of a fire on hot summer nights without the added heat. 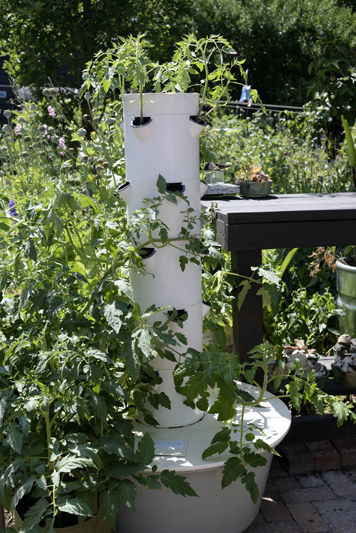 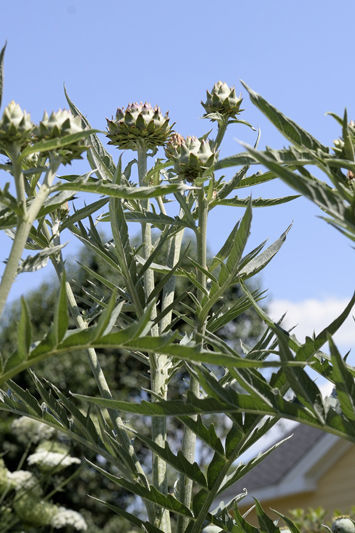 Artichokes are tasty and pretty.

We celebrate amber waves of grain in the stirring anthem “God Bless America,” but few people have celebrated those life-giving grains by growing them in their home gardens. Enter Brie Arthur, one of the people in the vanguard of the new movement to expand the palette of plants we grow, adding both the beauty and the benefits of edible crops, including grains, in our personal landscape.

In a system Arthur calls “foodscaping,” ornamental trees, shrubs, annuals and perennials are mixed with edibles, including grain crops such as wheat, barley, oats, rye, corn, millet and sorghum. In her first book, “The Foodscape Revolution: Finding a Better Way to Make Space for Food and Beauty in Your Garden,” Arthur explains, “Inspired by Rosalind Creasy and her Edible Landscaping books, I set out to create a suburban yard that was both bountiful and beautiful despite my tight budget and concerns about my homeowner’s association’s (HOA) covenants.”

To her surprise a year after planting her first foodscape garden, she received her neighborhood’s Yard of the Year Award. “It was an empowering moment when I realized we can develop a balance between ornamentals and edibles and meet the landscape guidelines set by HOAs,” she wrote.

When they’re grown among other garden plants, grains have a special beauty we overlook when they’re farmed en masse over acres of land. The seed heads of barley and wheat have an art deco pattern and tidiness about them that is extraordinarily beautiful. Amaranth and sorghum produce ornamental plumes that wave in the breeze.

Implementing the techniques of foodscaping not only is a wonderful adventure in a new way to garden, it also carries many personal and environmental benefits. In Arthur’s case, she is able to grow of much of the food her family needs, saving on her budget, as well as her peace of mind. She knows that the food she’s eating was grown without harmful chemicals and from seeds that have not been genetically engineered into a “Frankenfood.”

“Ninety percent of the corn on the market is GEHR (Genetically Engineered for Herbicide Resistance),” Arthur said. To avoid that, grow your own.

She adds that growing your own food “also reduces food miles (the measurement of the fuel it takes to transport food from a distant farm to the consumer) and makes the landscape a more biodiverse habitat for insects, birds, butterflies, turtles, frogs and mammals.”

For those living at the lake where distances to shops are great, harvesting from your garden rather than the grocery store can save a lot of driving. It’s a win-win proposition.

arthur manages her garden by changing plants twice a year in a cool season/warm season cycle. To prepare for the new season’s crops, she uses a gas mower with a spinning blade to down the leaves and spent plants, including perennials, such as phlox, which self-sow every year. She leaves the chopped biomass in place to feed the soil.

“I used to spend hours pulling out all the plants and hauling them away,” Arthur said. “Now I can do the job in 45 minutes.” As an added bonus, with all the left-behind organic material, her soil gets better every year. She may add a thin layer of mulch on top for the sake of looking tidy, but the new plants will be covering the ground in just a few weeks.

Her cool season tasks begin around Thanksgiving when she adds an organic fertilizer to the soil to feed the soil microbes, thus resulting in healthier plants. She warns that using fast-acting products such as Miracle-Gro is like eating a Snickers bar. It provides quick energy, but no sustainable nourishment.

When the soil is ready, she plants cool season greens and vegetables such as arugula, lettuce, kale, celery, beets and cabbage varieties. In December (Arthur lives near Raleigh, North Carolina — a climate not too different from ours) she plants barley, oats, wheat and rye intermingled with cool season flowers such as poppies, larkspur and nigella, which she also sows from seed. Those annuals will wait through winter and begin sprouting in time to blend attractively with the grains.

Around mid-June, Arthur switches to warm season crops. After harvesting the grain seeds and mowing down and chopping up the plantings (with the mower) and adding organic fertilizer, she plants heat-loving crops such as rice, corn, sorghum, millet, sunflowers, sesame, okra, eggplants and other vegetables, including tomatoes, zinnias, cleome, cosmos, marigolds and coleus (to save money, she propagates her coleus from last year’s plants).

Other beneficial plants to include are umbels — plants with umbrella-like, spreading flowers such as carrots, celery, cilantro, dill and fennel. These all are food for both people and pollinators.

She edges her beds with plants that deer and other pests dislike. Deer avoid the pungent garlic odor and flavor; it also deters in-ground pests, such as moles and voles. Potatoes, arugula and dwarf basil are two bushy plants that look pretty in the garden, but also deter deer and rabbits. (Arthur grows more than 100 pounds of potatoes along a foundation landscape edge. When she harvests the tubers, she leaves the smallest ones in the ground for next year’s crop. She is never without homegrown, organically raised potatoes.) The larkspur that makes the garden an enchanting place to be in the cool season time of the garden also is poisonous to deer. If you have enough of it on your property, she said, they’ll stay away.

One of Arthur’s favorite summer crops is tomatoes. She grows hundreds of plants, most heirloom varieties you won’t find in grocery stores. One of her favorites is ‘Cream Sausage’, a bush variety that fruits prolifically all at once. The 3-inch-long, sausage-shaped fruit has an ivory-yellow skin and a sweet, yet slightly tangy, acidic flavor that Arthur calls “incredible.” Her preferred tomato seed source is Seeds by Design, which sells improved heirlooms selected for disease resistance and good fruiting.

She tucks the tomatoes in the garden borders, grows them in special planting towers and uses rows of indeterminate varieties growing in pots as portable walls to screen parts of the garden. By early August, she has hundreds of pounds of tomatoes, which she serves at an annual Tomato Tasting Fundraiser party she hosts in her garden. Her guests consume gallons of Bloody Marys mixed with freshly harvested heirloom tomato juice; pounds of bacon, lettuce and heirloom tomato sandwiches; and pizzas topped with homemade, garden-grown tomato sauce and homegrown basil pesto.

Although her garden is not without some work, Arthur has developed techniques to make it efficient and she still has time to write books, entertain and enjoy other aspects of life. Her reward for her time spent cultivating garden is a bounty of edibles that are beautiful, as well as nutritious.

Through trial and error, Arthur has discovered unexpected plant combinations that are both beautiful and mutually beneficial. Here are a few:

• Tomatoes with Callicarpa americana (our native beautyberry). The beautyberry is an excellent support to the tomatoes, and the eye-catching purple berries in fall extend the garden season.

• Sorghum bicolor with Joe Pye weed and sunflowers. Arthur recommends planting this tall-growing combination at the back of the border.

• Rice and Fothergilla. Arthur recommends upland rice varieties that do not require saturation such as ‘Black Madras’ (dusky, deep mahogany leaves and seed spikes of chartreuse edible rice) and ‘Carolina Gold’ (medium-grain rice that was a staple in South Carolina from the late 18th century.

• Buckwheat and Agastache foenicalum (anise hyssop). The buckwheat blooms early with white and pink flowers. Both are excellent plants for pollinators.

• Barley and Baptisia australis (false indigo). Arthur calls barley the queen of all the grains because of its beautiful upright stalks.

• Emmer aka farro wheat and Phlox paniculata ‘Bright Eyes’ (garden phlox). Emmer is an ancient wheat strain that is lower in glucose than modern forms. Arthur explains that modern wheat has 42 chromosomes, a lot for bodies to digest.

Learn more about mixing vegetables, fruits, grains and ornamental plants in your garden:

“The Foodscape Revolution: Finding a Better Way to Make Space for Food and Beauty in Your Garden” by Brie Arthur, St. Lynn’s Press, $21.95

The Foodscape Revolution: Finding a Better Way to Make Space for Food and Beauty in Your Garden

Gardening with Grains: Bring the Versatile Beauty of Grains to Your Edible Landscape

Brie Arthur’s front garden in spring includes two beautiful swaths of emmer wheat intermingled with self-sown larkspur and poppies. Arthur is pioneering the idea of growing grains in the garden as both ornamental and edible plants.

The “walls” of this private garden room are fruiting blueberry shrubs and rows of potted indeterminate tomatoes that grow tall and continue to fruit until frost cuts down the plants. The celosia growing in the fire pit will bloom in bright red “flames,” giving the effect of a fire on hot summer nights without the added heat.

Artichokes are tasty and pretty.