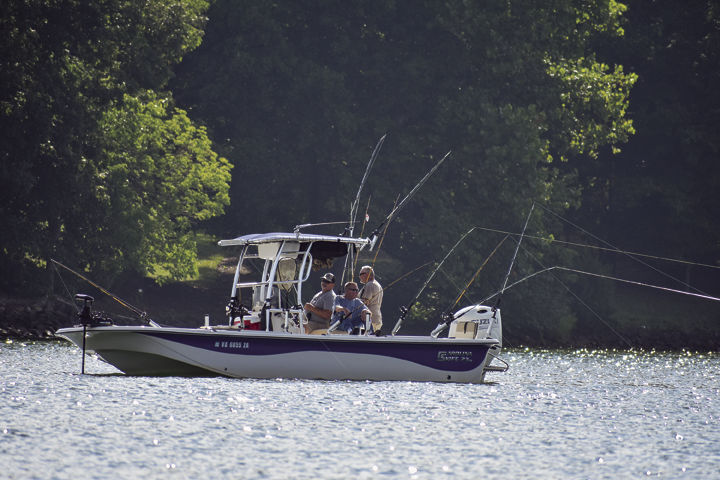 A crew of anglers casts several lines on a Sunday morning hunt for striper. 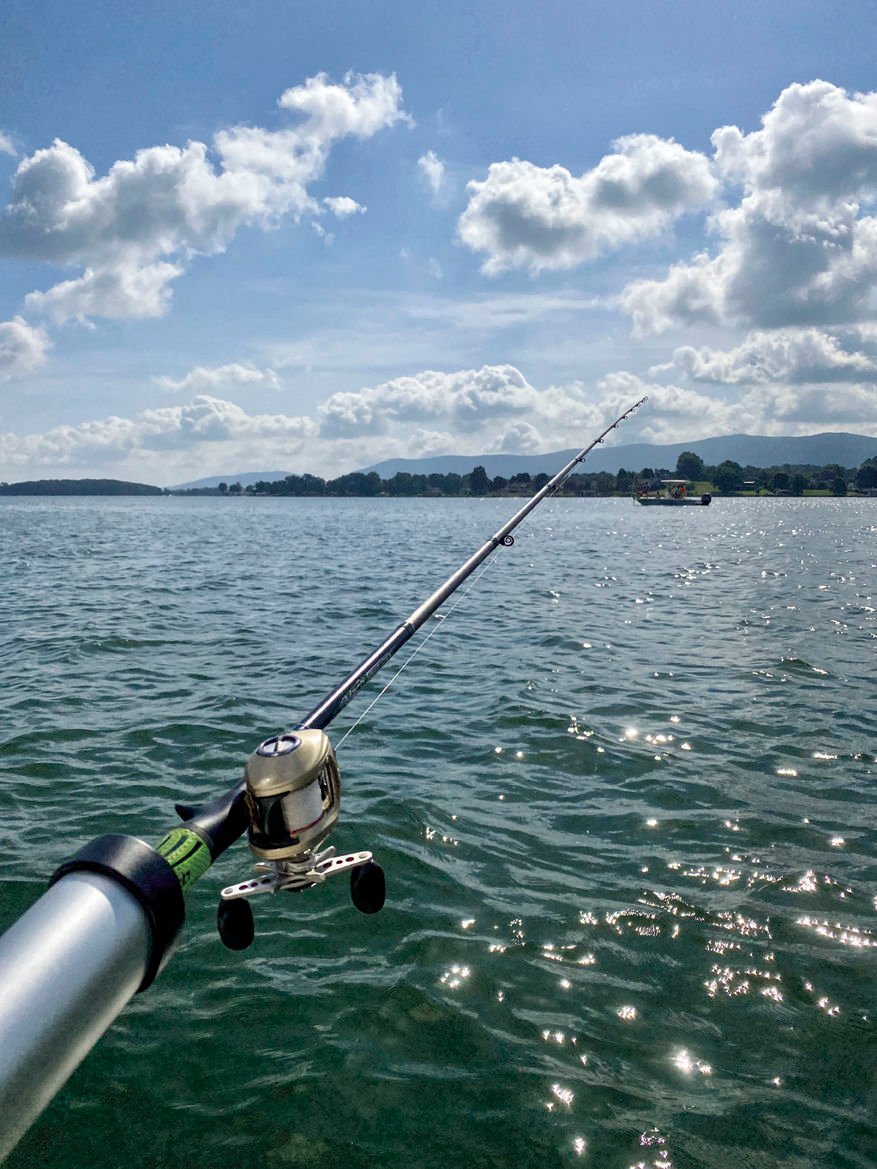 One of four lines is cast, set and ready for battle on a Sunday morning striper bass fishing charter. 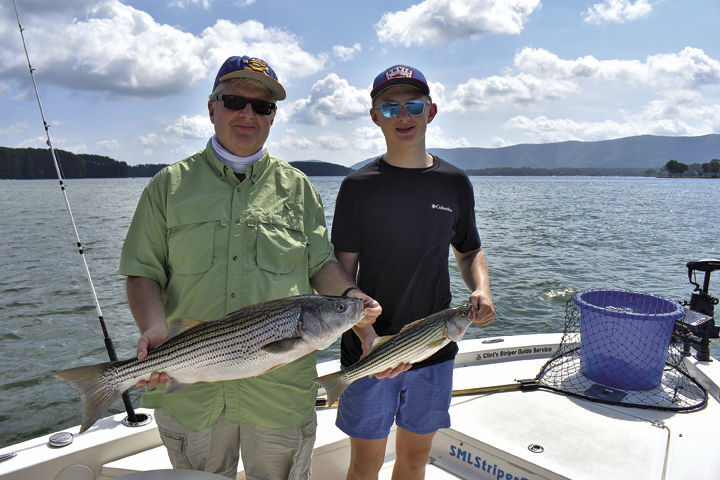 Chuck Swanson of Roanoke and his fishing companion display their catches. 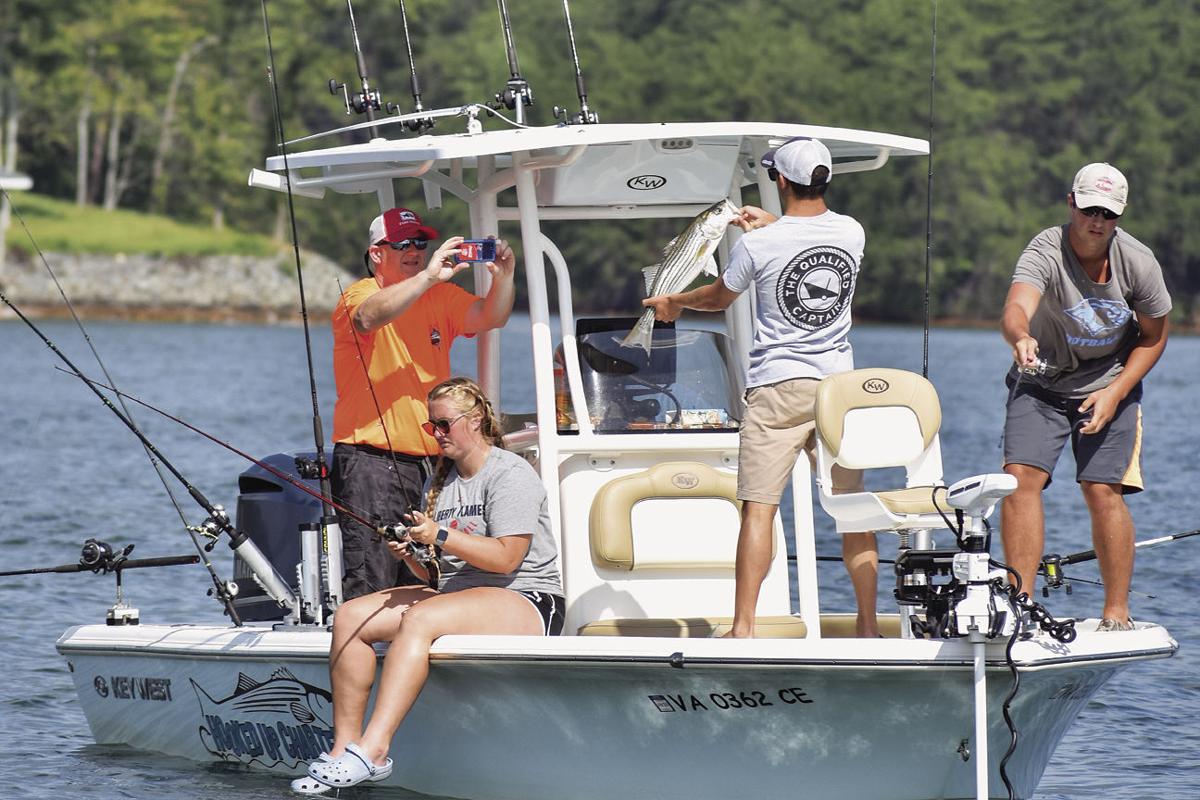 Robert Goodman snaps a photo of Ben Schoenwisner’s fresh catch. Casting off the front of the Hooked Up Charters boat are Amy Goodman and Nick Thurston.

Story and photography by Ashley Kairis

“Fish on!” These two words, while rather unexciting on their own, can spark pure thrill and adrenaline when put together.

For first-timers and active anglers alike, Smith Mountain Lake is a well sought-after fishery with a healthy supply of smallmouth, largemouth and striped bass. The particularly elusive of the bunch are the striped, commonly known as stripers.

These fish are constantly moving and can have unpredictable behavior, making it all the more gratifying to get them in the net and bring them on board.

The process of catching a striper is not as simple as casting a line on a shoreline with a bobber. Not to say that isn’t also fun, but it will not yield as impressive results.

The equipment and the bait

To reel in a sizable, photo-worthy catch, an angler needs specific equipment, rods, reels, bait and tackle supplies. It helps to also have the latest technology on board to find the traveling schools of fish beneath you.

As most guides can attest, a big part of their job is laying the groundwork and providing these things. It’s all about giving every angler of any skill level or age the best chance of reeling in some of the lake’s largest, most challenging fish.

As another captain, Robert Dean Wood, who owns Hooked Up Charters, puts it, by the time a person were to rent a boat and buy the necessary bait and tackle, they'd spend more money than they would by going with a guide. In fact, the bait fish of choice called shad, that stripers really love, are not sold in stores in Virginia. Instead, they must be caught.

Outside of the boat, rigs, line and bait, one of the other main assets brought by a guide is the right way of combining them all. There are innumerable, unique methods these guides use to give their guests the best chance of a big catch.

This might mean using different bait, putting a few planer boards off the back of the boat or even using a hand-fashioned stick of sorts to repeatedly hit the boat floor.

Yes, this truly is a method, as wacky as it may seem that has worked to create intrigue and curiosity in the fish. The idea is they swim upward to figure out where the noise is coming from, which takes them upwards toward the bait.

There are some things a person can only learn from fishing alongside someone who has come to master it.

Wood, who has fished the waters of SML for 40 years, started up his own guide service three years ago.

“I built my new home here and started my guide business with the hopes of spending the rest of my life giving both young and old a chance to catch the fish of their lifetime here on Smith Mountain Lake,” Wood said.

As a man who has fished all over the place, Wood said SML is his home and his favorite place to cast a line with clients.

“To me, every trip is a new story,” he said. “It’s the kids and young anglers that make memories for me.”

While guiding a father and son from Roanoke on a half-day trip, Gray got to see the father, Chuck Swanson, catch the largest fish he’d ever caught in his life. For him, that’s a big part of what keeps his passion for guiding and for finding striper alive.

Gray has logged thousands of hours on the water and has been a guide on SML for seven years, though he claims he’s “still pretty new to the game.”

Some guides have been offering tours for decades, which goes to show what a valued pastime striper fishing is and has been for many generations on the lake. There are more than a dozen guided striper fishing services to choose from, based in areas all over the lake.

For those seeking the thrill of a bent rod, a spinning reel and a battle to bring a striper to the surface, consider one of SML's guided fishing tours.

A crew of anglers casts several lines on a Sunday morning hunt for striper.

One of four lines is cast, set and ready for battle on a Sunday morning striper bass fishing charter.

Chuck Swanson of Roanoke and his fishing companion display their catches.

Robert Goodman snaps a photo of Ben Schoenwisner’s fresh catch. Casting off the front of the Hooked Up Charters boat are Amy Goodman and Nick Thurston.