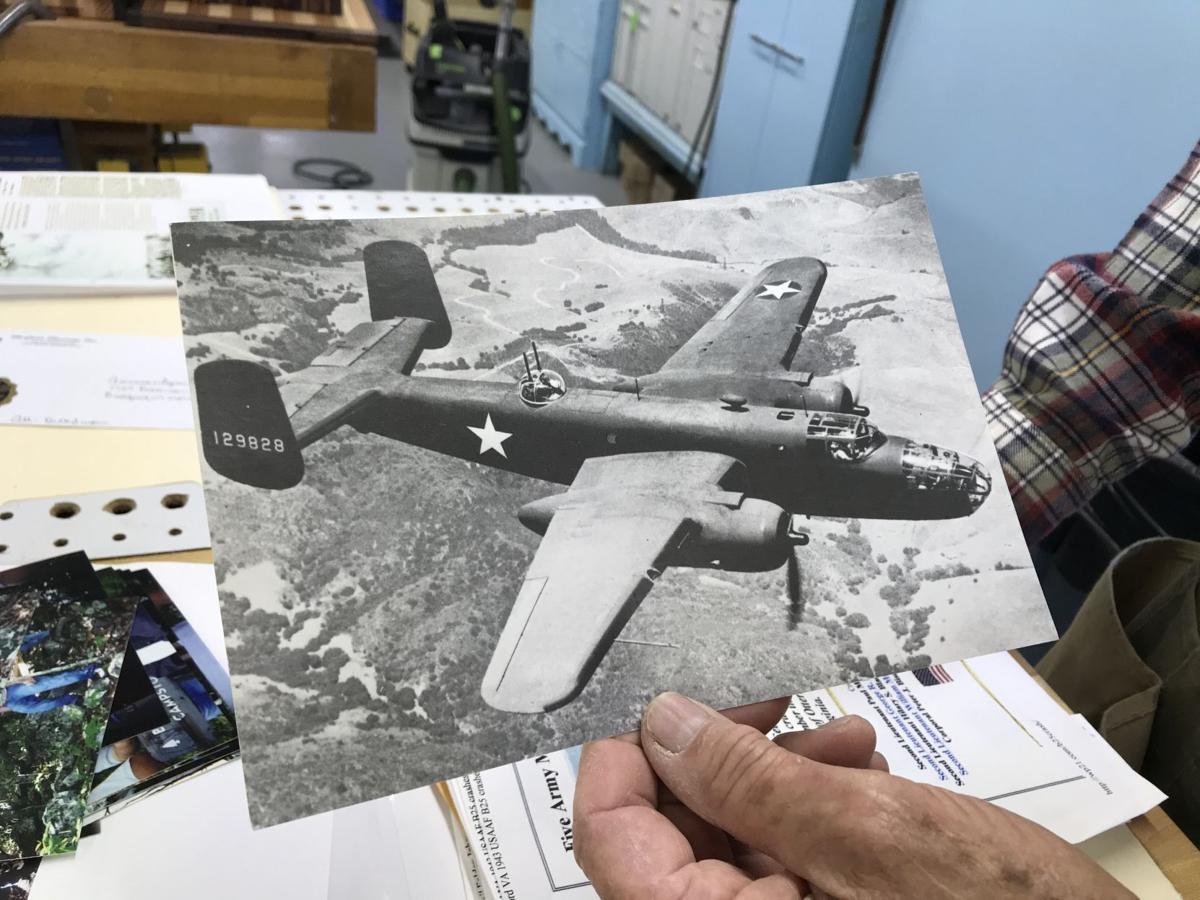 Richard McGann shows off a photograph of a B-25 Bomber plane in his woodworking shop in Campbell County on Tuesday, Nov. 17, 2020. 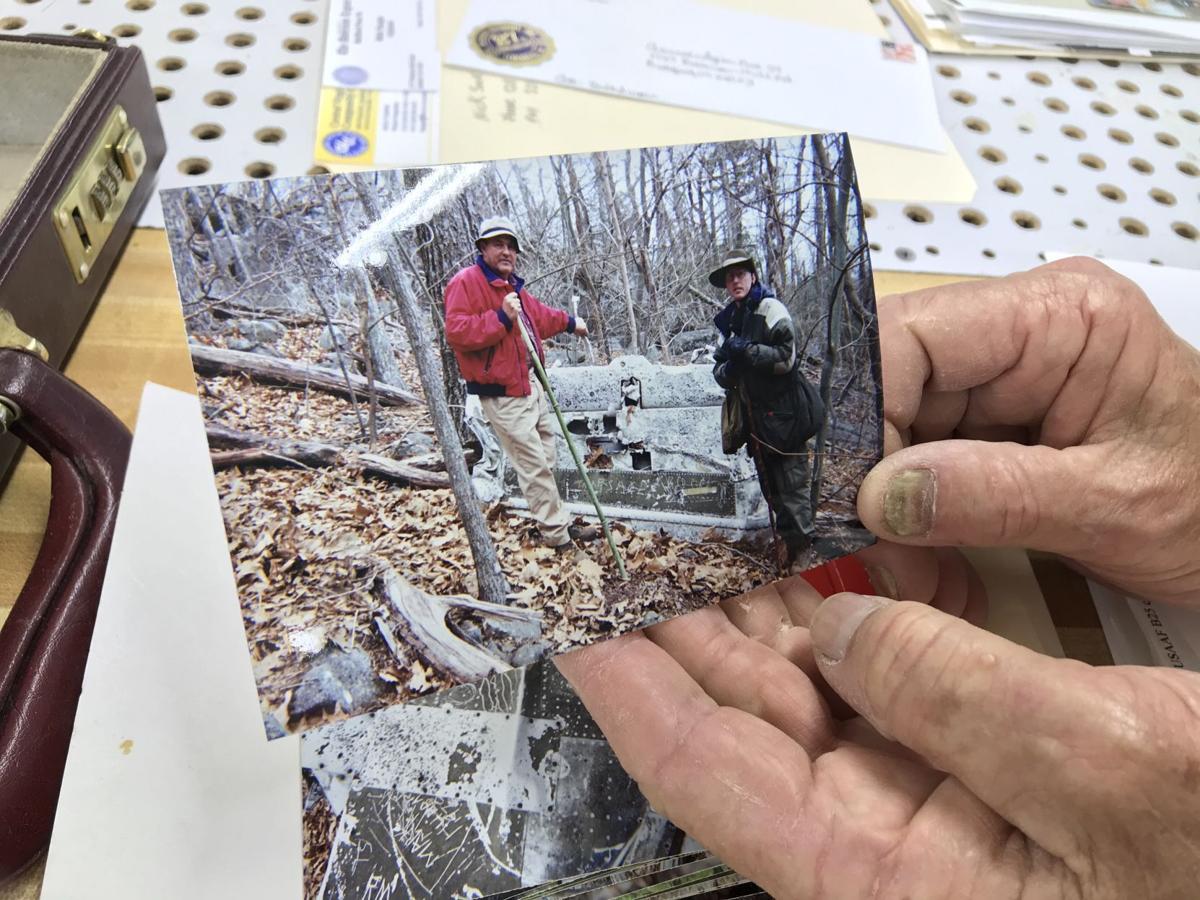 Richard McGann shows off a photograph from the wreckage of a B-25 Bomber plane on Sharp Top Mountain in his woodworking shop in Campbell County on Tuesday, Nov. 17, 2020.

Larry Lynch was 13 years old when he watched the sky turn red over his family’s Bedford County farm. It was June 22, 1950, and it had rained that day. By late evening, it was hot and muggy, and he was sitting out in his yard after chores with his father and a neighbor, trying to escape the summer heat.

They heard the plane before they saw it, which wasn’t unusual, but Lynch remembered the sound — high-pitched and fluctuating, an abnormal whine of the engines, the only warning that preceded its power-dive plummet to the ground below. Then, they heard the explosion.

Now, at 84, Lynch is one of the last surviving firsthand witnesses of a plane crash that killed three men: a production model AJ-1 Bomber, the Navy’s first strike plane designed to carry the nuclear bomb, crashed en route to a naval air station along the Patuxent River in Maryland.

He said some people will say the plane exploded in the air. Others will say they could hear the pilots screaming. But Lynch said neither is true.

“All you could see was red,” Lynch said, and the explosion was loud enough to be heard within a 5-mile radius, and it cratered the earth on impact, several feet deep, the footprint of a large house.

Armed with flashlights, Lynch and the others rushed about 2 miles to the crash site where they joined a handful of other bystanders, cars parked in a semicircle to direct their headlights at the strewn mess of the wreckage.

“There was really nothing you could do,” Lynch said.

Still, he can remember pieces of the plane and body parts lying across the ground, the smell of burning jet fuel and flesh. There was a parachute and parts of a body in a tree close by, and until a deputy and a fire truck showed up from Bedford, and the state police came to turn people away, there was nothing to do but stare.

“I had never seen a crash like that before,” Lynch said. “Living on a farm you see death, but you don’t ever see it like that.”

The plane went down in a hayfield on A.J. Laughlin’s farm off Falling Creek Road. All three of the pilots were killed in the crash after the engines exploded.

This is the same story Lynch has told many times before, including at a memorial dedication in 2002, when a plaque commemorating the crash was placed at the Glenwood Service Station for the public to view. But even now, retelling the story, Lynch said it’s not the kind of thing you are ever likely to forget.

If he hears a plane, and the pitch of it changes, it’s enough to immediately flash him back — 13 again, and watching the sky go up in flames.

Though some people might have knowledge of this crash, or others like it, Richard McGann of Campbell County has made it his mission to make people aware of the four plane crashes in Bedford County that, in total, took the lives of 13 military men.

In the early 2000s, McGann and Jeffrey Clemens, who then preached at New Prospect Church, created and placed plaques to commemorate these four crashes in the county, including the memorial for the AJ-1 Bomber in 2002.

McGann said it’s a devastating loss and an unusual amount of incidents, something worth commemorating with more than the scrap metal and wreckage left behind at many of the crash sites.

A woodworker and owner of McGann Masonry, he built the pedestals for the plaques, helped raise money and create the memorials. He and Clemens’ first undertaking was a marker to commemorate the wreckage of a B-25 Mitchell Bomber, which crashed into Sharp Top Mountain on Feb. 2, 1943. Five young airmen were killed.

“I have a sympathy in my heart for somebody that dies in the military,” McGann said. He has a manila file folder of newspaper clippings and glossy 5-by-7 photographs, and the designs for the brick pedestals he created at several of the memorial locations.

After a several-mile trek into the woods in rugged terrain, McGann said, with the help of a Boy Scout troop, he set the plaque into a rock at the crash site, with an exact replica also on display at New Prospect Church at the base of the mountain.

It’s a hike he said he must have made a dozen times, running up and down the mountain to drill the holes in the rock with battery-operated equipment. When one drill ran out, he had to go back down to charge it before he could continue boring the holes for the mount.

McGann served in the Navy during the ‘60s and retired as a Navy chief petty officer. It’s one of the things that drove his mission.

“As a veteran, you like to hear about the people that came before you,” he said. “It evokes a strong feeling.”

It wasn’t until after this commemoration that the Bedford American Legion Post 54 got involved. On Dec. 30, Post Commander Nick Soukhanov could recall every detail of each of the four crashes, an integral piece of Bedford County history, and one he refuses to let slip into obscurity.

The walls of the post hall are a patchwork of the county’s military history — framed photos, records and newspaper clippings almost obscuring the plaster walls. Soukhanov said this, and the memorials, was one way to keep these memories alive.

“It’s real history. It’s real life. That’s why we’re here ... we document as much as we can, and it’s something we pass on to folks,” Soukhanov said. “It’s like an education. You don’t go around impressing people with it; you share it.”

Soukhanov said the reason for the crashes probably had much to do with Bedford’s geography. With the mountainous terrain and with no radar, crashes were more common, especially in wartime as new aircrafts were put together, with less quality controls and less training.

An Air Force veteran himself, Soukhanov remembers graveyards of planes at airbases and hopes the legion’s efforts, along with the work of McGann and Clemens, will stop people from forgetting this era of Bedford County history.

The other two crashes memorialized were a mid-air collision of two U.S. Navy NE-1’s during a civilian pilot training program in Montvale on April 27, 1943, and an F4U Corsair Fighter Jet crash into the mountains above Big Island on April 2, 1945 during a routine training mission.

A memorial for the 1943 crash is located at the entrance to the Montvale Library, and the Big Island crash is commemorated in Cherry Point, North Carolina, where the pilot’s unit was from.

Standing in Post Hall 54, Soukhanov and Post Finance Officer Al Vincent surveyed their own records, eager to share the stories that help define Bedford County’s strong military history, one buoyed by something as massive as the National D-Day Memorial just two miles away, or as personal as the metal plaques that memorialize the four crashes.

“A lot of people have forgotten,” Vincent said.

Soukhanov agreed, gesturing at the walls around them.

Richard McGann shows off a photograph of a B-25 Bomber plane in his woodworking shop in Campbell County on Tuesday, Nov. 17, 2020.

Richard McGann shows off a photograph from the wreckage of a B-25 Bomber plane on Sharp Top Mountain in his woodworking shop in Campbell County on Tuesday, Nov. 17, 2020.