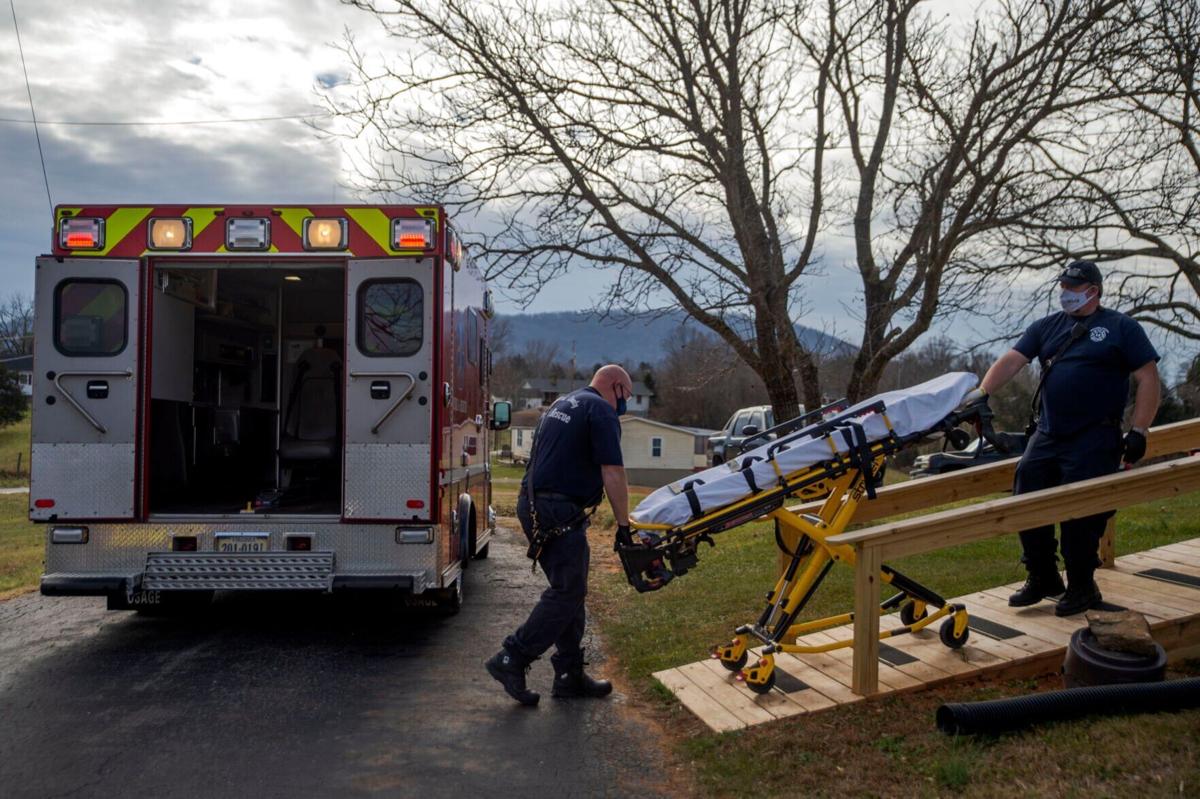 Bedford County Firefighter-EMTs Kevin Musgrove and Jarrett Branch take a stretcher into a home in preparation to transport a patient Dec. 8. Members of the rescue squad take on overtime and often find themselves shorthanded. 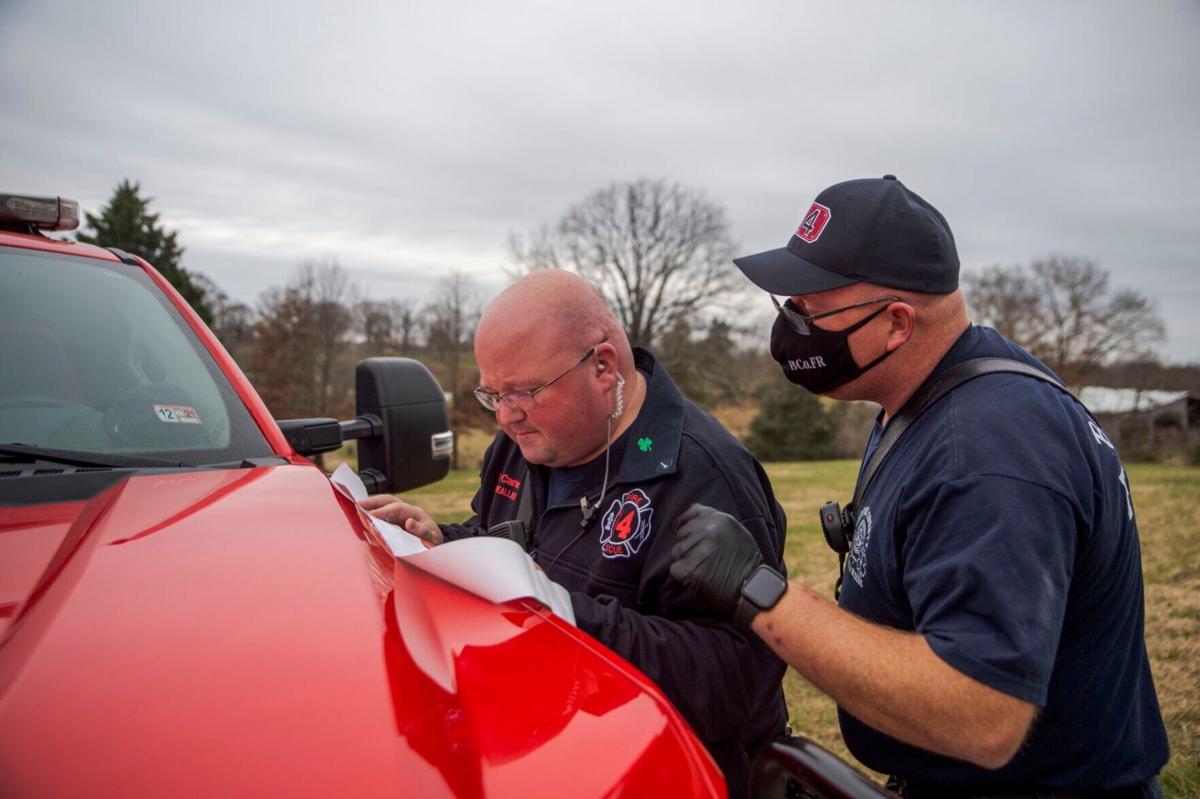 Leaning on Company 10, Bedford County lieutenant Mark Carter and firefighter-EMT Kevin Musgrove look over a patients EKG, a record of the heart’s electrical activity which can detect different conditions such as a heart attack, before transporting them to Carilion Roanoke Memorial Hospital on Wednesday, Dec. 8, 2021. 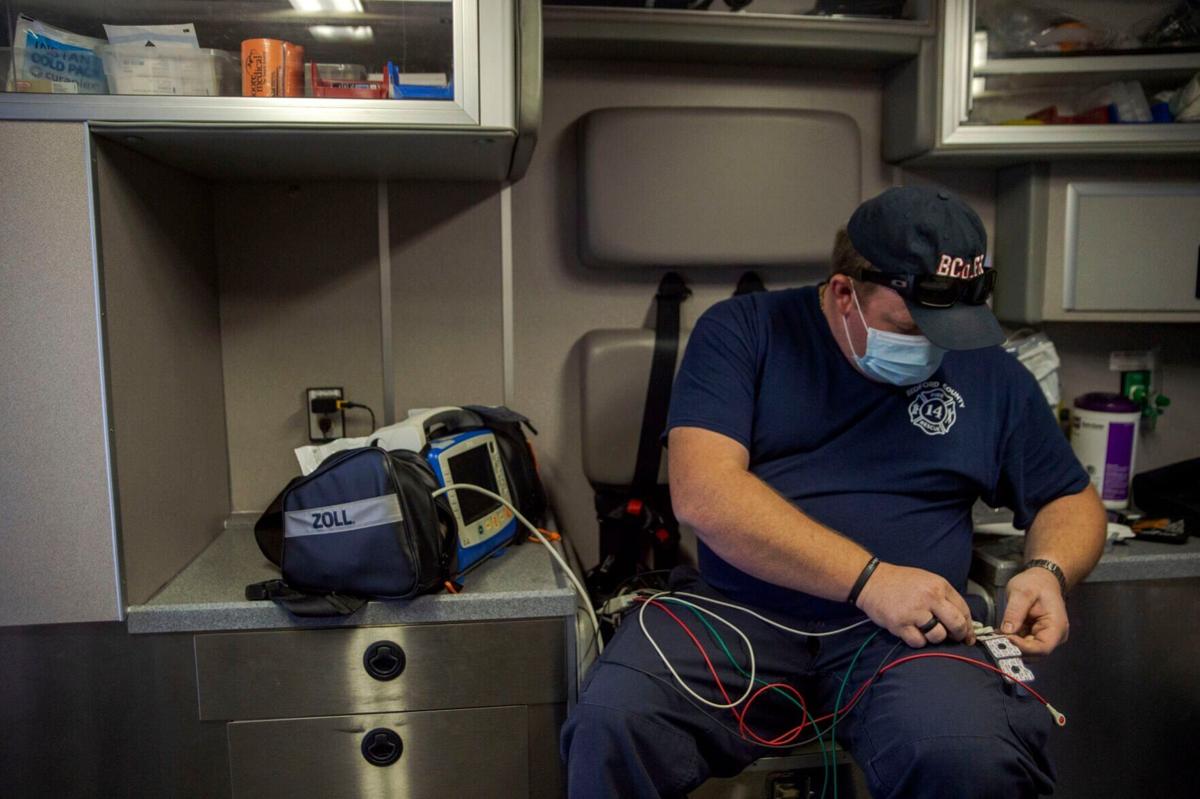 Bedford County Firefighter-EMT Jarrett Branch replaces sticky pads on a 12-lead EKG, which monitors the heart’s electrical activity and checks for different conditions such as a heart attack, in the back of Medic 14-8 at Carilion Roanoke Memorial Hospital after transporting a patient Wednesday.

Fire and rescue departments across the region and state have been facing staff shortages of fire and EMS employees to varying degrees, putting a strain on both emergency service workers and the communities they serve.

Bedford County has six medic unit trucks, but most days, at least one — often two — is out of service because there are not enough staff to fill all of them, said Abbey Johnston, deputy chief of operations for Bedford County Fire and Rescue.

Bedford County fire and rescue personnel have been discussing staffing and recruitment issues with county supervisors and staff for months, seeking viable solutions and ways to make their locality more competitive.

“If we go back to data and look at our call volume in this county, we easily could justify having eight medic units, but at this time, we have six,” Johnston said. “All it takes is one truck being on a call or getting displaced, and then it’s like a trickle effect, so that increases the response times everywhere.”

Operating with just 13 full-time fire and rescue professionals on duty for 24-hour shifts, plus helpful but dwindling volunteers who pitch in when they can, covering the nearly 800 square miles of Bedford County with a continually increasing call volume is no easy feat.

Staff firefighter/EMTs and firefighter/paramedics, both full- and part-timers, consistently work overtime. Though the county is supportive of paying for overtime, it places stress on resources already stretched thin. Staff is stretched even thinner due to 911 calls for things that do not warrant emergency services, such as blisters, said former Bedford County Department of Fire & Rescue Chief Jack Jones.

Jason Morgan has been an advanced EMT with Bedford County for about 20 years. Monthly overtime varies, Morgan said, but county EMS employees can easily work more than 100 hours of overtime per month and sometimes work 72-hour shifts, he said.

Morgan said likely the biggest factor affecting staffing shortages and recruitment struggles is inadequate pay. Whereas, years ago, job openings in the field received between 25 and 50 applicants, Morgan said now a department is lucky to get a mere handful.

“I’m one of those employees that hasn’t seen a merit increase or a cost-of-living increase since about 2004, 2005,” he said. “There’s a lack of growth within our organization, because we don’t have the staffing to fulfill, and we don’t have the financial backing to keep people here. It’s a vicious cycle.”

Shutdowns of colleges during the COVID-19 pandemic and a general lack of interest in public safety careers created a perfect storm where “the bottom fell out” this past spring, Johnston said. And, like many industries across the board during the past several months, staffing shortages arose in first responder careers.

“A lot of what we do can’t be taught online as easily. It’s hard to teach somebody online how to check blood pressure,” Johnston said, describing how college shutdowns affected the field.

Data from the national registry of EMTs show starkly the declining numbers of those entering emergency services work in just one year’s time.

Johnston said the most drastic shortage is of paramedics, as that requires additional training to provide advanced life support services. While basic EMT certification typically can be achieved within one college semester, paramedics obtain at least a two-year associate’s degree plus completion of clinical hours, various exams and certification.

With the staffing limitations, sometimes there are precious few people with advanced life support training — which includes the ability to administer IVs and medications — working in the county. On Wednesday, for instance, only one paramedic was on duty in Bedford County, even though six ambulances were staffed that day with basic life support providers, Lt. Mark Carter said.

Recruitment and retention of employees is increasingly difficult in the area, since Bedford and surrounding localities are drawing from the same pool of candidates. Competition exists between localities to attract qualified candidates, with some places — such as the cities of Lynchburg and Roanoke — trying sign-on bonuses. Bedford County is unable to offer sign-on bonuses due to lack of department funding.

The complexity and severity of medical calls during the pandemic increased significantly in Bedford County, Jones said, largely because the populace did not feel safe going to hospitals or other medical facilities for risk of COVID-19 exposure.

“They would put their ailments aside. If they had chest pain, they would put it aside, or think it wasn’t that bad, or they’d be so anxious or fearful about going into a hospital and getting sick that by the time they finally called 911, often the people were sicker,” he said.

There is no concrete, proven solution to fix the situation and bring everything to an ideal state.

“We are trying to find ways to help keep our people healthy and safe, and help serve the community and get them what they need in a timely manner. It is a juggling act right now,” Johnston said.

A group of young adults from the U.S. Naval Sea Cadet Corps got to experience a wide range of weather during a recent two-week stay at Smith M…

Multiple charges have been placed against two men.

By now, anyone who’s paying attention knows that Smith Mountain Lake real estate is booming. “Everyone has to be somewhere,” the saying goes, …

A grand old lady has a new name, title and owners. A Moneta home has been named to the Virginia Historic Registry and the owners are now waiti…

Rep. Bob Good and Rep. Morgan Griffith braved the weather amid uncertain travel conditions speak to the Proud Patriots of SML on Jan. 4 .

Treating the mind, body and spirit

At first Smith Mountain Lake was a destination for family vacations. Then it became a place to seek refuge from the pandemic. Now it is home a…

Residents of Rocky Mount will soon have another place to go to for a fresh cup of coffee.

Bedford County Firefighter-EMTs Kevin Musgrove and Jarrett Branch take a stretcher into a home in preparation to transport a patient Dec. 8. Members of the rescue squad take on overtime and often find themselves shorthanded.

Leaning on Company 10, Bedford County lieutenant Mark Carter and firefighter-EMT Kevin Musgrove look over a patients EKG, a record of the heart’s electrical activity which can detect different conditions such as a heart attack, before transporting them to Carilion Roanoke Memorial Hospital on Wednesday, Dec. 8, 2021.

Bedford County Firefighter-EMT Jarrett Branch replaces sticky pads on a 12-lead EKG, which monitors the heart’s electrical activity and checks for different conditions such as a heart attack, in the back of Medic 14-8 at Carilion Roanoke Memorial Hospital after transporting a patient Wednesday.