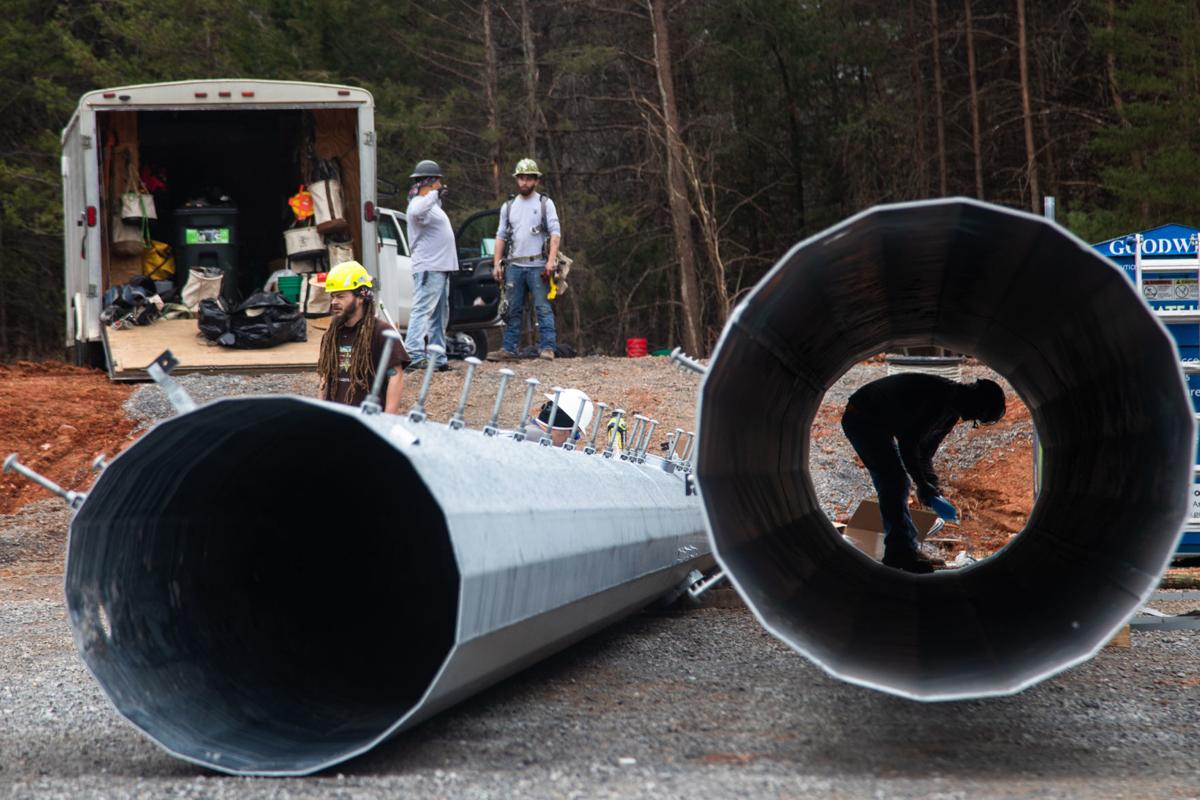 Blue Ridge Towers workers prepare to assemble a broadband internet access tower in Huddleston on Feb. 5, 2020, as a part of the multi-tower system being built across Bedford County.

Blue Ridge Towers has responded to a lawsuit from the Bedford County Broadband Authority over management of a broadband tower built in Big Island, stating the authority itself has breached contract in shortchanging the company.

Blue Ridge Towers constructed multiple towers in Bedford County as part of its broadband expansion and is currently buidling towers in Franklin County.

In its response last month, BRT claims the authority is shortchanging BRT of $3.5 million as laid out in contracts. It states that terms of the transfer are still under negotiation and that it always meant to turn the property over to the authority “and still intends to do so.”

Instead, it claims, the authority is “attempting to extract an enormous windfall” by denying BRT a proper refund for purchasing the tower site, as described in its contract, along with proper commission payment for its work setting up provider contracts at the site.

Part of the broadband authority’s lawsuit focuses on leases BRT signed with US Cellular and T-Mobile “that it had no right or authority to enter,” according to the authority. The suit demands those leases be transferred over to the authority and that BRT hand over money it’s made off those leases.

But BRT states the authority directed it into those contracts and authority representatives were frequently directly involved with them. Attached to its response, BRT includes several documents, email chains and meeting minutes that mention those contracts.

Walker referenced a conversation with Bedford County Administrator Robert Hiss in which Hiss said at first the county and authority didn’t want to pay BRT commission, which was later amended to offering 10% to 11% commission, lower than the 15% to 20% BRT asked for.

“Mr. Hiss told me that the Authority and Bedford County’s Board of Supervisors were now of the opinion that they paid BRT a lot of money for the construction of the wireless towers, so they expected BRT to gift for free its leases with the cellular carriers,” Walker wrote in his statement.

BRT claims in its response that the authority breached contract and “engaged in misrepresentation and deception,” and asks for the lawsuit to be dismissed.

Country Star Luke Combs Paid For The Funerals Of 3 Men

This will be one of the most challenging months to fish at Smith Mountain Lake due to the hot weather and heavy boat traffic. Anglers should c…

Napoli by the Lake opens at Bernard's Landing

Rising food prices and staffing shortages have not stopped a local restaurateur from expanding services in the Smith Mountain Lake community. …

The purchase will cover the pipeline’s first 10 years of operation and will make it one of the first interstate natural gas pipelines to achieve carbon neutrality for its operational emissions, Mountain Valley said.

Water skirmishes raged all around Smith Mountain Lake during the annual Pirate Days celebration. Crazy Horse Marina in Moneta was one of sever…

Here is a list of all the pirate activities happening around Smith Mountain Lake this weekend.

Friendly pirates return to the waters of Smith Mountain Lake this weekend.

Blue Ridge Towers workers prepare to assemble a broadband internet access tower in Huddleston on Feb. 5, 2020, as a part of the multi-tower system being built across Bedford County.