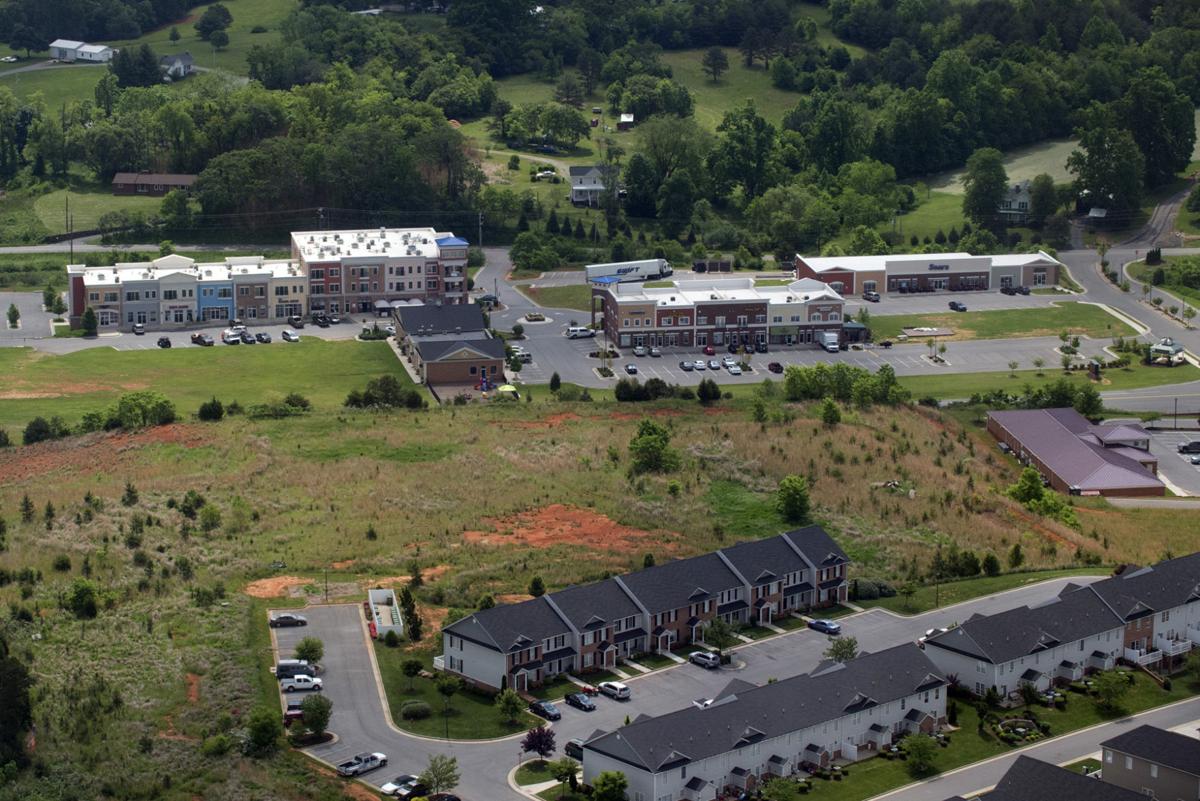 The heart of Moneta has been relocated to a spot along Virginia 122, where a bypass was built. 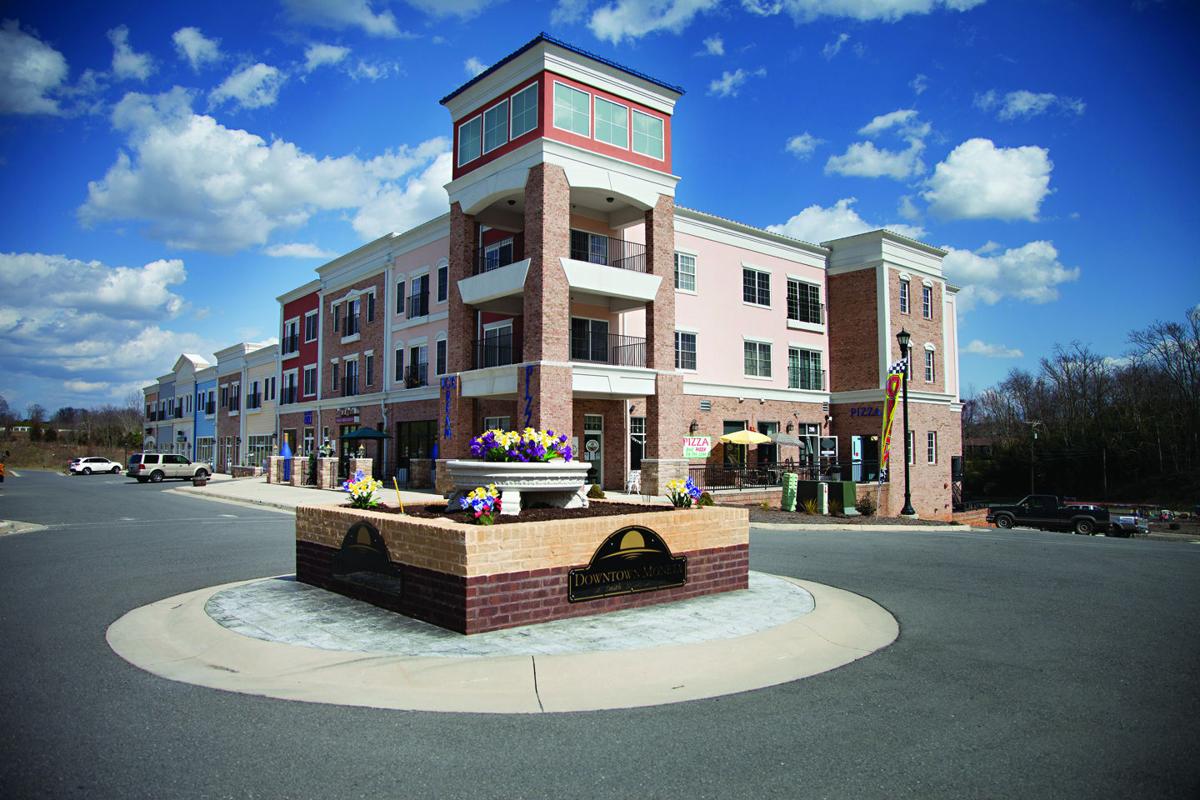 Moneta has been reborn as a shopping hub with a new downtown being built.

This story was originally published Oct. 28, 2011, in Laker Weekly.

Industries started and stopped, train stations came and went, a Hollywood crew and actors descended on the town, Main Street was blocked forever, and a bypass sent the little town into a downward spiral -- and yet Moneta, like the phoenix, is rising again.

It all started in a community that had been predominately populated by farmers since the American Revolution.

In 1857 three young men, George, John and James Lipscomb from Pittsylvania County, bought 20 acres of land from Stephen Harris on Terry's Branch and the Lynchburg-Salem Turnpike. It was along this branch that the village of Moneta developed.

Jordan Lipscomb, father to the young men, started a tanyard and the area would be known as Lipscomb's Tanyard for the next 30 years. A shed was built to grind tanbark from oak, hemlock and chestnut trees, which were then put in large vats buried in the ground and filled with water to soften the hides into leather. The hair from cow hides was saved for mattresses.

When the Civil War began, the three Lipscomb brothers joined up, but George was soon discharged to continue making leather for the cause.

After the war ended, two other brothers, John Anthony and Ambrose Lee Thaxton, came to a hill across from the tanyard on land their mother had inherited from the estate of her father, Anthony Rucker. They started a blacksmith shop and built a two-story log home.

A one-room schoolhouse and a church were constructed as other families moved into the area and married. In 1880, John Thaxton bought his mother's property and built his first store with the help of his neighbors. The Thaxtons began to work for a post office in their store.

Mildred Thaxton suggested the name Moneta from a book she was reading at the time (perhaps John Keats' "The Fall of Hyperion: A Dream [1856]," or Moneta, a subject of Roman Mythology). The post office was approved in 1882.

Just to the north of Moneta was the neighborhood of Martintown, near the Piney Grove Elementary School and African-American Promised Land Baptist Church. Martintown was formed from 182 acres left to six former slaves and their families by Caroline Hancock Martin. Most of the men, who had taken the name of their former owners (a common practice at the time), received 30 acres on which to live and farm.

The new town was relatively isolated in southern Bedford County and the only railroad, the Virginia and Tennessee, passed through the northern part of the county. The building of the Virginian Railroad in the early 1900s played a role in putting Moneta on the map.

Henry Huttleston Rogers, an executive of John D. Rockefeller's Standard Oil Company, financed the railroad, connecting the coal fields of Deep Water West Virginia to the ocean ports at Norfolk while passing through Moneta. Italian immigrants provided the bulk of the labor for building the new line and by 1908, the first passenger train arrived in Moneta.

Train service led to new industries, including a lumber mill, canning factories, feldspar (a mineral used in paints, ceramics and glass) mines, a wooden-box factory and dairies. Also built near the railroad were stores such as the Dinwiddie Store and the Meador store. A Ford dealership attracted customers willing to trade in their horses for an automobile or a tractor; a gas station soon followed.

A bank opened in 1911 but closed in 1925 when farming economics prevented farmers from paying back their loans. Other banks followed suit during the Depression. Martintown disappeared when residents were forced to leave to find work in the cities.

Moneta survived with a population of about 200 during the mid-1900s. A new high school opened in 1934, a Plymouth Chrysler dealership was opened at the site of the old Thaxton Store and the fire department was built in 1955 on the site of the old Rucker Store.

The building of Smith Mountain Dam had a huge impact on Moneta. Planning for the project started in the 1920s, but studies at the time concluded the expected water flows were insufficient to generate the necessary hydroelectric power.

However, by 1954, when Appalachian Power Company purchased the land the Staunton River Power Company had bought for the project, new developments in pump-back dam operations and turbine-system design made the project viable.

By 1961 concrete was being poured for the dam, the construction of which was completed in 1963. It took another three years for the lake to achieve full pond. Moneta prospered because of its relatively close location to the construction areas and the 600 people who worked on the project. In the end, 20,600 acres were flooded in three counties, resulting in 500 miles of new shoreline, and most importantly the beginning of a flood of recreational activity centered on the new Smith Mountain Lake.

However, too much of a good thing can and did have negative consequences. The flood of boaters and tourists overwhelmed available services in Moneta, and new shopping centers and stores were built closer to new lake communities. The older Moneta stores became an antique mall, restaurant, produce business and a boat repair and storage facility.

For about 30 years Moneta carried on. It got another unexpected boost when, in 1990, Walt Disney Studios chose Moneta as a set for its movie, "What About Bob?" The town was spruced up for scenes featuring Richard Dreyfuss and Bill Murray, who starred in the movie.

Although the scenes portrayed a town near Lake Winnipesaukee in New Hampshire, the attention the production recieved, including a 1992 article in The Washington Post about "Virginia's Jewel in the Blue Ridge," attracted even more boaters, tourists and part- and full-time residents to the area.

Once again, Moneta's one-step-forward-one-step-back history added another chapter when, for reasons of safety combined with a government mandate to close 25 percent of railroad crossings throughout the country, Moneta's grade crossing became a prime target for closure (the crossing at Moneta had a blind curve).

Although not the primary factor in the decision to close the crossing (the increase in SML-related traffic was a prime consideration), there was a terrible tragedy in the 1970s when a woman crossed the tracks to shop at a local store. Her house caught fire with her baby inside. Before she could return with the fire department, a long coal train had passed through the crossing, blocking access. Everyone watched helplessly as the old house was quickly consumed and the baby perished.

Unfortunately the railroad tracks bisected the town as well as Virginia 122. So when the crossing was closed in 2000 after the Virginia 122 bypass was completed around the town, residents knew old Moneta would become a dead end and the downtown area would continue to deteriorate.

Today, Downtown Moneta, a new development of restaurants, stores and single-family homes just west and north of the old village, continues to grow. After 129 years, Moneta survives and appears to be thriving, although perhaps not in the way the Lipscombs, Thaxtons, Saunders, Ruckers and many other original settlers had imagined.

Dr. Sam was an icon in Old Moneta

Holly Sweet, whose family has lived in Moneta for more than a century, had a rare sickness as a toddler that a number of doctors couldn’t diagnose.

A trip to Dr. Sam Rucker Jr. proved it to be a reaction to a tick bite, she said.

Rucker, who died in 1987, is a popular name that still resonates with locals. He carried on the practice of his father, Sam Rucker Sr., by making house calls and often not charging patients for his service.

He had no waiting room and patients waited in their cars for their turns. CalvinWoodford, a lifelong village resident, said they were on sort of an honor system to see who went next.

The community returned the favor by taking up collections for him, said Woodford.

Marie Batton, who grew up in the town, described Rucker as Moneta’s icon.

She remembers his glasses that he wore down by his nose and his serious demeanor when giving school physicals that all students had to pass to engage in extracurricular activities.

He also came to her house to diagnose her case of measles.

“He assured me I would be just fine and not to scratch,” she said. “It was reassuring if Dr. Sam said it was going to be OK.”

Rucker’s house still stands and has been converted into a gift shop close to the village. His small office also remains on site.

“He took care of everybody in this area,” Woodford said.

Wakesurfers wonder about the activity's future at SML

Wakesurfers at Smith Mountain Lake are getting a few last rides in as summer officially comes to an end this week. Many are bracing for a sign…

The heart of Moneta has been relocated to a spot along Virginia 122, where a bypass was built.

Moneta has been reborn as a shopping hub with a new downtown being built.