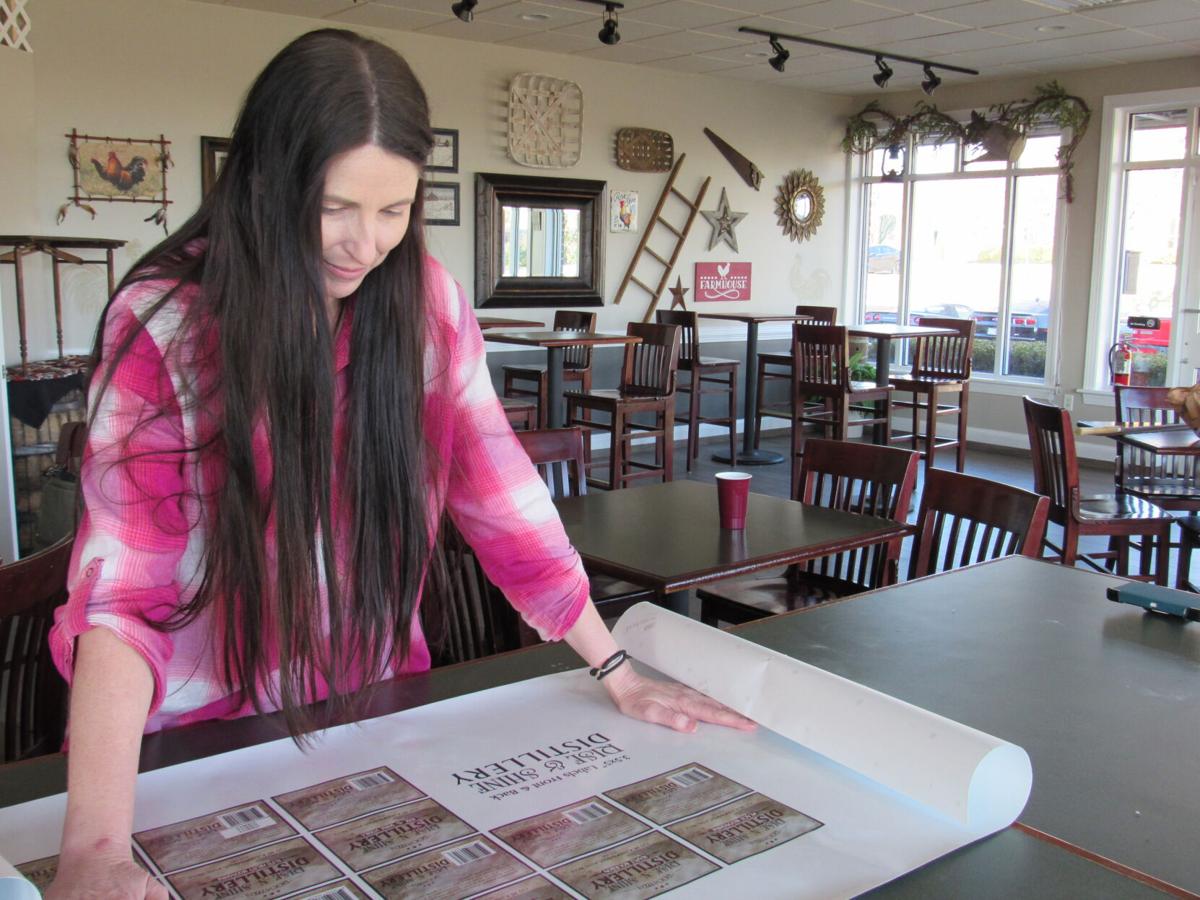 Laura Turner looks over labels for the flavored moonshine she plans to have for sale at her Westlake location later this year. 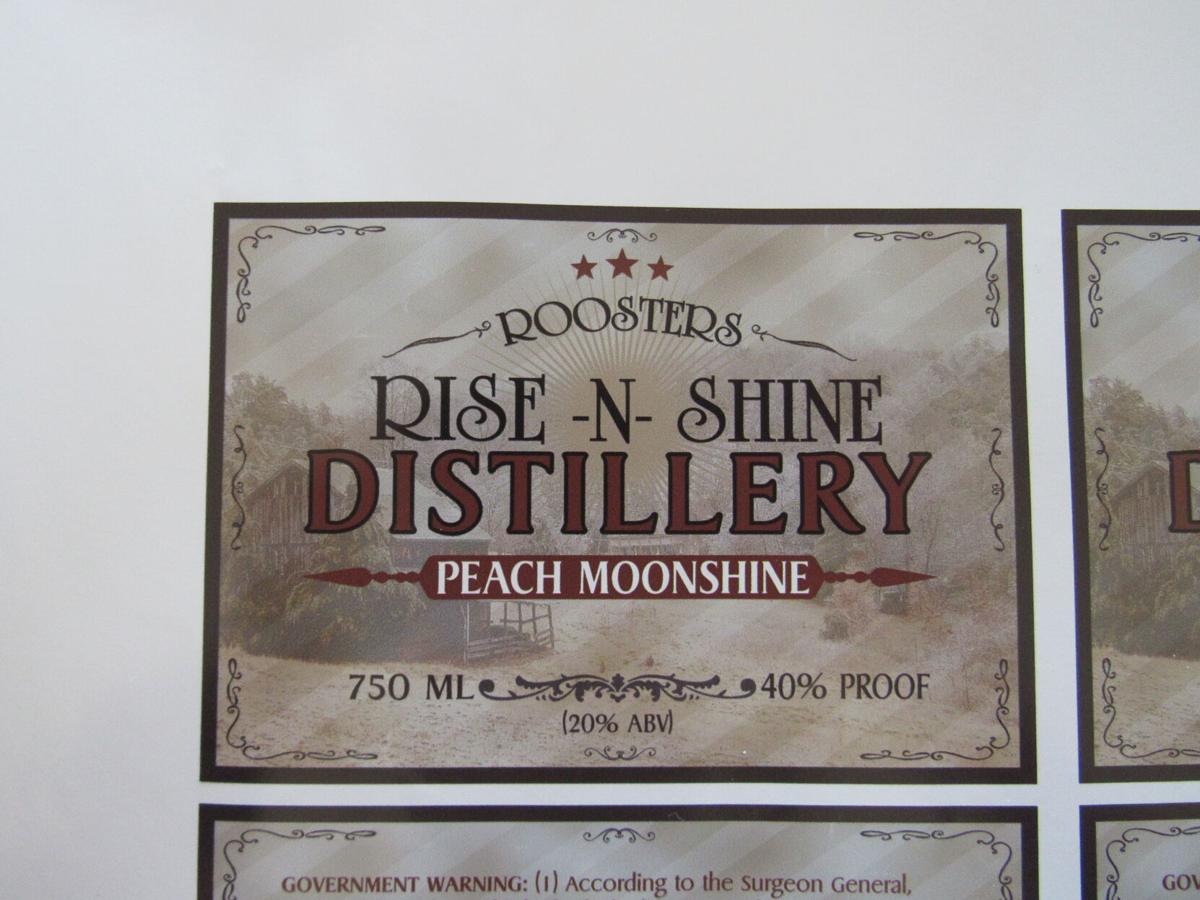 Peach moonshine is one of several varieties Laura Turner plans to offer at Roosters Rise-n-Shine Distillery.

Burnt Chimney resident Laura Turner is moving forward with preparations to open a distillery and tasting room in Westlake later this year despite an uncertain future. The Franklin County Board of Supervisors are set to give a deciding vote on the business next week after deadlocking in February.

The vote tied 3-3-1 on Feb. 16 with Blue Ridge District representative Tim Tatum absent. The vote was to modify zoning on the property to allow for a distillery and tasting room. Supervisors later agreed to delay the vote until their next meeting on March 16.

Turner admitted she was surprised by the supervisors who voted against her business, including Boone District representative Ronnie Thompson, who was one of the more vocal critics. He said the store had the potential to be detrimental to the county and said it was too similar to a bar.

“I was shocked,” Turner said of the vote.

While alcohol will be served at the business, which Turner has named Roosters Rise-n-Shine Distillery, she said it is different from a bar. One of the main differences is that a customer is allowed only 3 ounces of alcohol per visit.

There are multiple restaurants with bars that are near her Westlake location that have no limits on the amount of alcohol they can serve, Turner said. Her business also has to follow strict Virginia Alcohol Beverage Control guidelines.

Turner said the idea for her distillery and tasting room would be to give customers the opportunity to taste the moonshine she sells before buying it. She expects to have several varieties of flavored moonshine. The flavors she is considering include banana, watermelon and peach. Those varieties will also change throughout the year, she said.

The process in finding a good flavor can be challenging, Turner said. While some things mix together well, others do not. A recent attempt at a peppermint moonshine did not go well. “It was awful,” she admitted.

The idea for the business had been something Turner had discussed with her father for a few years. She said it wasn’t until she visited Davis Valley Distillery in Rural Retreat that the idea began to take shape.

Turner formed a partnership with the distillery to provide the moonshine. She would then take that moonshine and add her own flavors to sell at the Westlake tasting room.

Turner considered locations in Roanoke, Rocky Mount and other spaces around Smith Mountain Lake before finding the one in Westlake. She began setting up the business in January with plans to open this spring.

In the months since moving into the location, Turner said she invested time and money into the space painting, decorating, purchasing a sign, obtaining permits in addition to paying monthly rent. She said she is hopeful for a positive outcome at next month’s meeting.

Britney Spears 'flattered' the world is so ‘concerned’ with her life

Britney Spears 'flattered' the world is so ‘concerned’ with her life

The Tri-County Lakes Administrative Commission is looking into ways to curtail wakesurfing in some locations around the lake.

Roosters Rise-N-Shine Distillery will be opening its doors in Westlake this Friday. The new store will provide customers with a taste of old f…

First ever SML Restaurant Week set for later this month

The Smith Mountain Lake Regional Chamber of Commerce is organizing the first SML Restaurant Week for April 19 through May 1.

The Virginia Department of Transportation plans a virtual design public hearing for a project to improve seven intersections along U.S. 220 be…

Fishing has been fair the past few weeks. Weather fronts have caused the water temperature to remain relatively low for this time of year. Bai…

Homestead Creamery has a plan to urge customers wary of dairy to try drinking milk again.

BEDFORD — A Moneta woman will serve just under three years behind bars after being sentenced Friday in connection with an August 2019 DUI crash that killed a man.

Restaurants prepare for a busy summer

Editor’s Note: This is an occasional series about how summer-based businesses are preparing for a second year of the pandemic.

Laura Turner looks over labels for the flavored moonshine she plans to have for sale at her Westlake location later this year.

Peach moonshine is one of several varieties Laura Turner plans to offer at Roosters Rise-n-Shine Distillery.