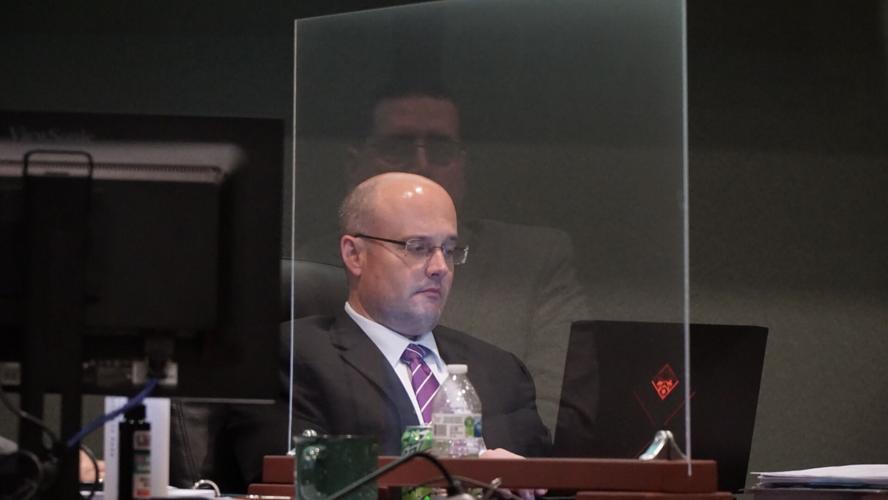 Franklin County Finance Director Brian Carter listens to remarks during a June 21 board of supervisors meeting. At the meeting, Carter explained the implementation plan for the county’s new pay structure. 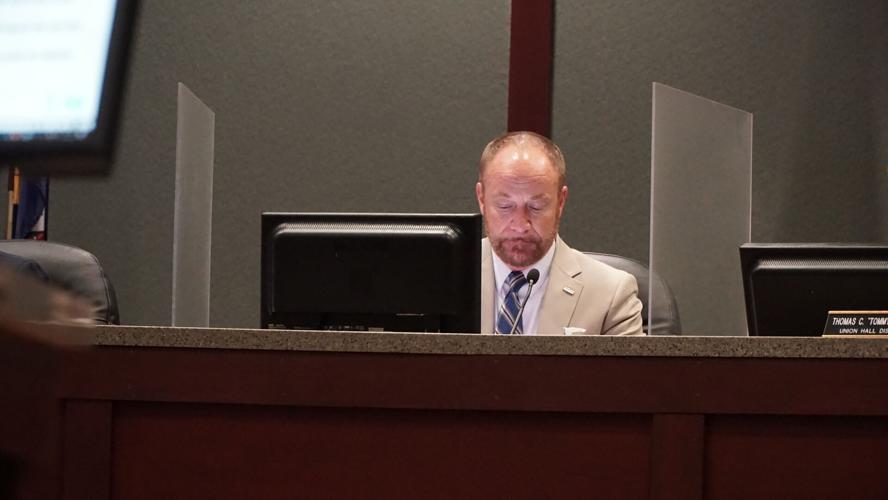 “There are milestone things that the [Franklin County Board of Supervisors] celebrates often: capital items, things like broadband expansion or water and sewer improvements,” Franklin County Administrator Christopher Whitlow said. “This ranks right up there with some of those improvements. ... It’s a commitment from this board that operations means something.”

“This does raise our starting pay to a minimum of $43,000 for corrections, $45,150 for patrol and then it...implements a career progression schedule in addition to the increases,” Carter said. “We also had increases for 911. Their starting pay jumped over $7,000.”

In the fall, the county brought Evergreen Solutions, a consulting firm, on board to take a hard look at its pay structure and provide recommendations to make the county’s salaries competitive with market peers.

In April, Evergreen presented its recommendations for a new pay structure, which the Franklin County Board of Supervisors adopted. The new structure divides county employees into three different pay plans: a general pay plan, a public safety pay plan and a pay plan for the sheriff’s office sworn staff. Each plan places jobs in a number of different pay grades, and each pay grade makes 5% more than the one preceding it.

The board then directed staff to figure out an implementation strategy for the new pay structure, which Carter presented on June 21.

“Basically all full-time employees will be able to have their market adjustment in year one, which is really fantastic news. We really thought it would be a two- or three-year implementation,” Carter said.”...We are anticipating at least needing—and we should have it based on preliminary revenue estimates from the compensation board—about $80,000 for the sheriff’s office to be able to make all of this work.”

He said all full-time staff members will receive at least a 5% cost of living increase. After that, market adjustment raises may differ from job to job partly based on previous compression. Compression occurs when there is little difference in pay despite differences in job duties, required skills and experience.

Evergreen partly addressed compression by moving certain positions into different pay grades, depending on the job and the need to bring its pay up to market value. The new structure also takes steps to prevent compression from reoccurring.

“The way we’re going to do that is take every pay grade and put it on a 30-year scale. ... We’re going to look at...employees...every five-year anniversary...to make sure they’re at the right point in their pay grade,” Carter said.

For example, an employee with 15 years of experience—whether all 15 years were at Franklin County or somewhere else—should be at the mid-point in the pay grade.

“If they’re not, what we’ll probably do in future budgets is come to the board with two items: a cost of living increase and an additional market adjustment,” Carter said.

A new retreat and adventure center opened this summer in Thaxton, breathing life into land that has sat vacant for many years.

Jacob Fracker's testimony against his colleague, who played a larger role in the insurrection, was cited by federal prosecutors.

FROM STRAY TO SAILOR

After almost a year and a half of construction, and many years more of dreaming and planning, Thomas Jefferson’s Poplar Forest celebrated the …

Smith Mountain Lake recorded its first significant boating incident of the year on July 21. At least three people were injured in a collision …

Grant West shared this photo of a recent sunset at Bridewater Bay in Moneta. The purple hue of the sunset can be seen reflecting of the calm lake.

Franklin County Finance Director Brian Carter listens to remarks during a June 21 board of supervisors meeting. At the meeting, Carter explained the implementation plan for the county’s new pay structure.