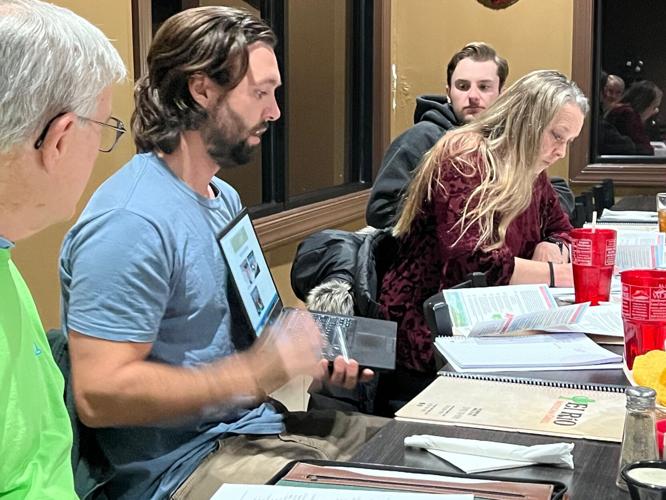 Task force chairman Josh McClure shows an image from his computer during the meeting. 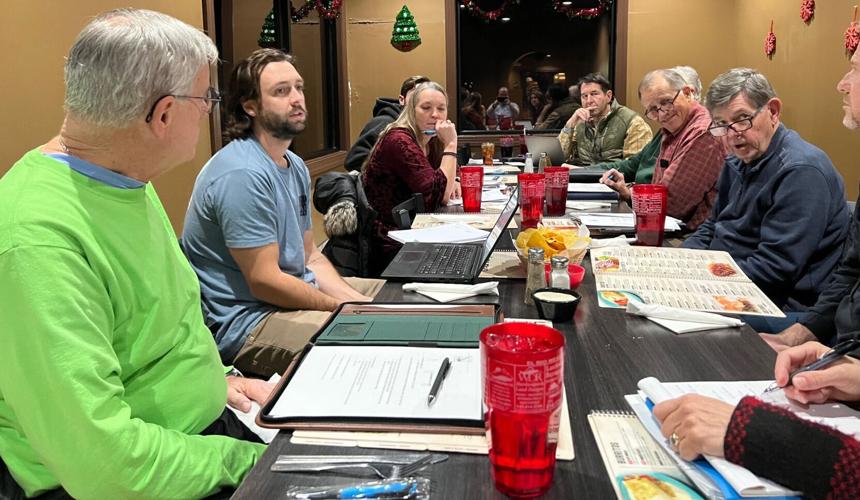 Members of the wake education task force discuss issues during their most recent meeting held at El Rio in Westlake on Dec. 20.

The impact of wakes from watersports such as wakesurfing continues to be a heated topic at Smith Mountain Lake even as temperatures have cooled on the water this winter. It is an issue that is getting a another look by some dedicated members of the community trying to find common ground on both sides of the issue and improve safety on the water while working to reduce dangerous wakes.

Years of pressure reached a boiling point last year when the Tri-County Lakes Administrative Commission agreed to allow applications for no-wakesurfing zones. Earlier this year the first application was submitted by CPT Buoys for a section of the lake near Merriman Run.

Residents on both sides of the issue converged at the TLAC offices in July for a public hearing on the no-wakesurfing zone. Several in attendance called for more efforts to educate the public on wake courtesy instead of creating the zones.

While the no-wakesurfing zone ultimately did not go through due to it being denied by the Virginia Department of Wildlife Resources, members of TLAC saw the public’s push for more education and decided to create a task force in October. Their goal would be to put a plan in place to better education the public on the dangers of boat wakes in time for the start of next year’s boating season.

So far, 13 members of the lake community on both sides of the issue have agreed to participate on the task force. Their second meeting was held last week at El Rio in Westlake, just next to the TLAC offices.

TLAC’s wake education task force is jokingly referred to by members as the WET Force. It is comprised of avid wakesurfers, members of the Smith Mountain Lake Association and some residents who have been critical of wakesurfing in the past. For some, it is their first time being involved with any official lake group.

Ben Vidovich was another member of the task force who later decided to join after participating in the public hearing. He said he wants to find a way to bring more education on the issues to the people who use the lake to ensure that everyone can enjoy it.

Josh McClure is the chairman of the task force. An avid wakesurfer and sales manager for HO Sports, a sporting good manufacturer, McClure said in participating in the task force he has seen that there is a lot of common ground on both sides of the issue.

“We really all have the same end goal,” McClure said.

Task force member Michael McCord agreed with the statement. “This has not been adversarial at all.”

McClure is optimistic this renewed effort to educate the public on dangerous wakes from wakesuring as well as other activities could be a benefit for Smith Mountain Lake. The efforts here could also be spread to other lakes that are facing the same issue.

Task force member Randy Stow participated in other efforts to improve wake education at the lake. He praised this new group and their interest in improving wake education. He’s hopeful that they will able to have a successful plan by next year.

“It appears to be the right team this time,” Stow said.

Stow was especially impressed by the younger members of the task force who had new ideas on how to reach the public, especially those younger individuals. “Those are the people we are trying to reach,” he said.

Rhonnie Smith is a member of the task force who has been vocal about the dangers of wakes, especially those created by wakesurfing. He is one of the lakefront property owners who joined together to apply for the no-wakesurfing zone earlier this year. He said he has been impressed with what they have accomplished so far.

“It’s been great,” Smith said. “Common ground can be found and that is what we are doing.”

The goal of the task force is to have an education plan in place by March of next year. The plan will be presented to TLAC and eventually shared with the community. Task force members are optimistic they will have something that will benefit the community by then.

“I know we will have something worthwhile,” Smith said.

Why you should consider booking multiple hotels while one vacation

Task force chairman Josh McClure shows an image from his computer during the meeting.

Members of the wake education task force discuss issues during their most recent meeting held at El Rio in Westlake on Dec. 20.