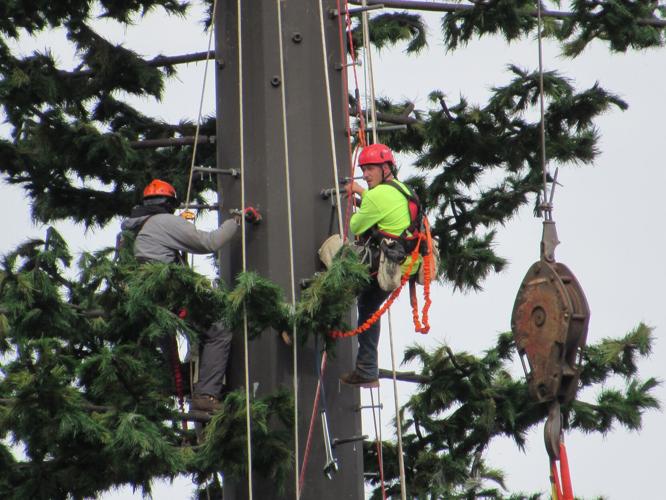 Workers were seen hanging from the side of the new communications tower in Westlake on Nov. 2. 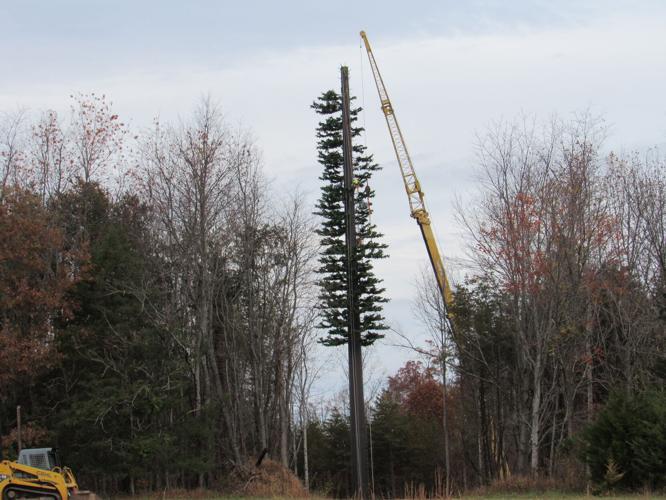 Construction on the Westlake tower started last week after more than a year of delays.

But it won’t do anything to improve wireless internet access in that community, as we originally planned. Instead, internet provider Seiontec is now planning to install equipment on a existing tower on Smith Mountain to serve the Westlake area. Seiontec, whose president said in August the Westlake tower is too low to reach enough customers, did not respond to a call or email seeking more information on its change of plans.

“They have provided data that indicates they can cover Westlake from that [Smith Mountain] location,” said Steve Sandy, assistant county administrator for Franklin County.

The recently constructed tower in Westlake is currently only expected to have equipment for Verizon installed sometime early next year. “I don’t believe it will include fixed wireless broadband coverage initially,” Sandy said.

Even though the broadband equipment was moved to another location on Smith Mountain, construction on the Westlake tower still had to move forward due to a contract between Franklin County and Blue Ridge Towers, which had agreed to construct seven communications towers in the county.

Much of this work is funded through the $2.4 million Virginia Telecommunications Initiative grant provided for the countywide project in 2020. Sandy said the state has approved plans to move the broadband equipment to Smith Mountain instead of Westlake to fulfill the obligations from the state to receive the grant funding.

The tower is the last of seven communications towers constructed in Franklin County with the goal of improving broadband internet access to underserved residents. It was delayed more than a year due to negotiations between Booker T. Washington National Monument and the Virginia Department of Historic Resources.

Due to the tower’s potential impact to Booker T. Washington National Monument’s viewshed, the tower’s location was moved farther back on the 12-acre lot behind Grand Home Furnishings. It was also reduced from a height of 199 feet to 160 feet and changed to monopine tower to better blend in with the surroundings.

The Westlake tower was originally supposed to provide broadband internet through the company Briscnet. That company withdrew from the project late last year and Seiontec took over.

At a meeting of the Franklin County Broadband Authority in August, Seiontec President Darrell Haag announced he would not be installing broadband equipment on the Westlake tower due to its height. He said the height would be too low to provide adequate service to the area and announced plans to install the equipment on a tower on Smith Mountain.

Rock Outdoors set to arrive in Westlake next summer

Rock Outdoors recently announced plans to have its newest location at Smith Mountain Lake open by late summer of 2023. This will be the third …

A new roundabout is beginning to take shape at the intersection of Brooks Mill Road and Burnt Chimney Road in Wirtz. It will be the second in …

Booker T. Washington National Monument will be hosting “An Old Virginia Christmas” program on Dec. 3. The event will look back on the holidays…

On Nov. 16, the Smith Mountain Lake chapter of the American Association of University Women raised funds for scholarships at its annual Silent…

BEDFORD — The Bedford County Board of Supervisors this week unanimously approved a special use permit that will allow Spring Lake Farm to become the place the property owners have long envisioned: a rural retreat and event venue to share with others.

Santa set to arrive at Bridgewater this weekend for expanded event

“Santa Around Bridgewater Plaza,” one of Smith Mountain Lake’s oldest and most beloved holiday traditions, will take place Nov. 26 from 11 a.m…

The Bedford County Board of Supervisors denied a proposed RV campsite in a 4-2 vote this week.

The Smith Mountain Lake Toucan and Parrot Pan steel drum bands will present a family Christmas concert from 3 to 5 p.m. on Dec. 10 at the Scru…

Apple has 'threatened to withhold Twitter' from the app store, says Elon Musk

Apple has 'threatened to withhold Twitter' from the app store, says Elon Musk

Workers were seen hanging from the side of the new communications tower in Westlake on Nov. 2.

Construction on the Westlake tower started last week after more than a year of delays.