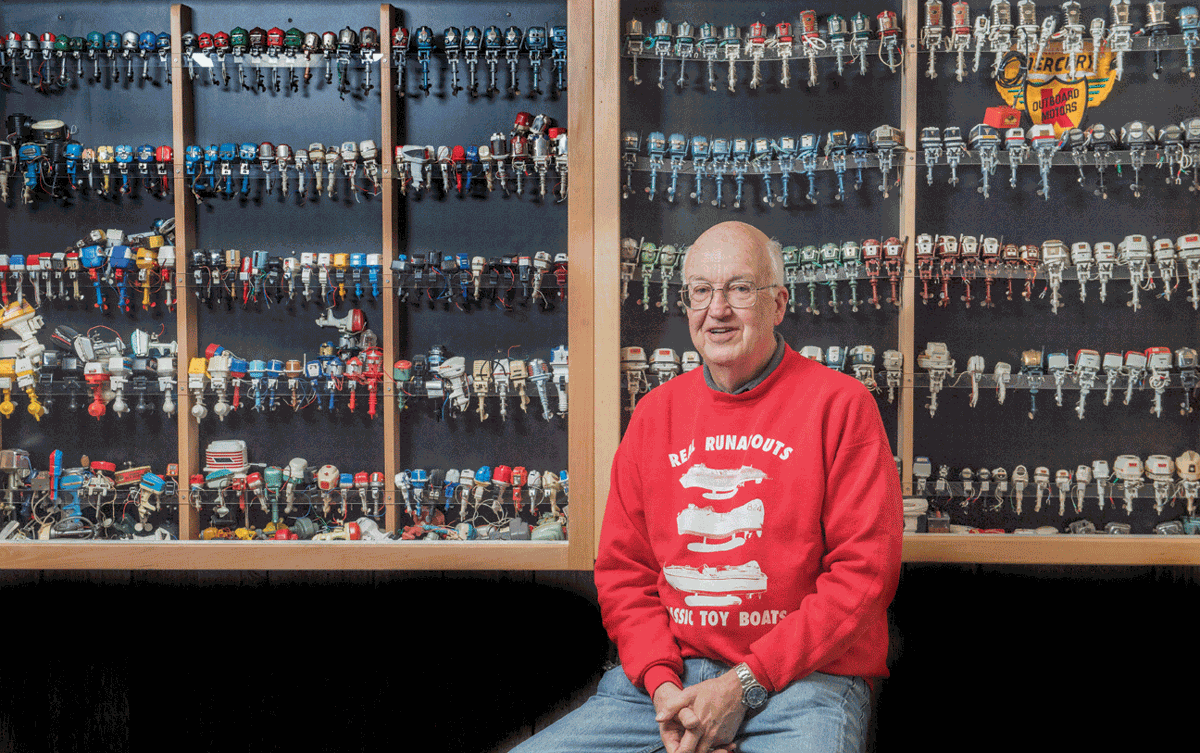 Jack Browning has a passion for boat motors that can fit in the palm of your hand. 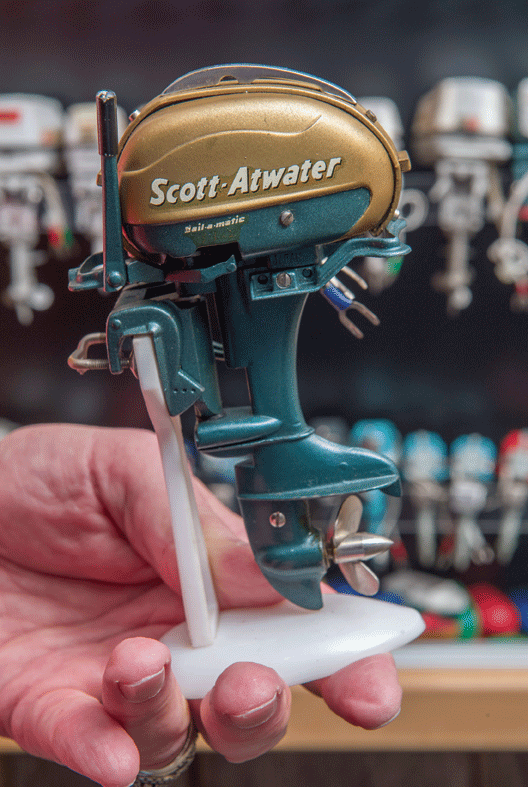 A replica 1956 Scott-Atwater was one of Jack Browning’s first motors. 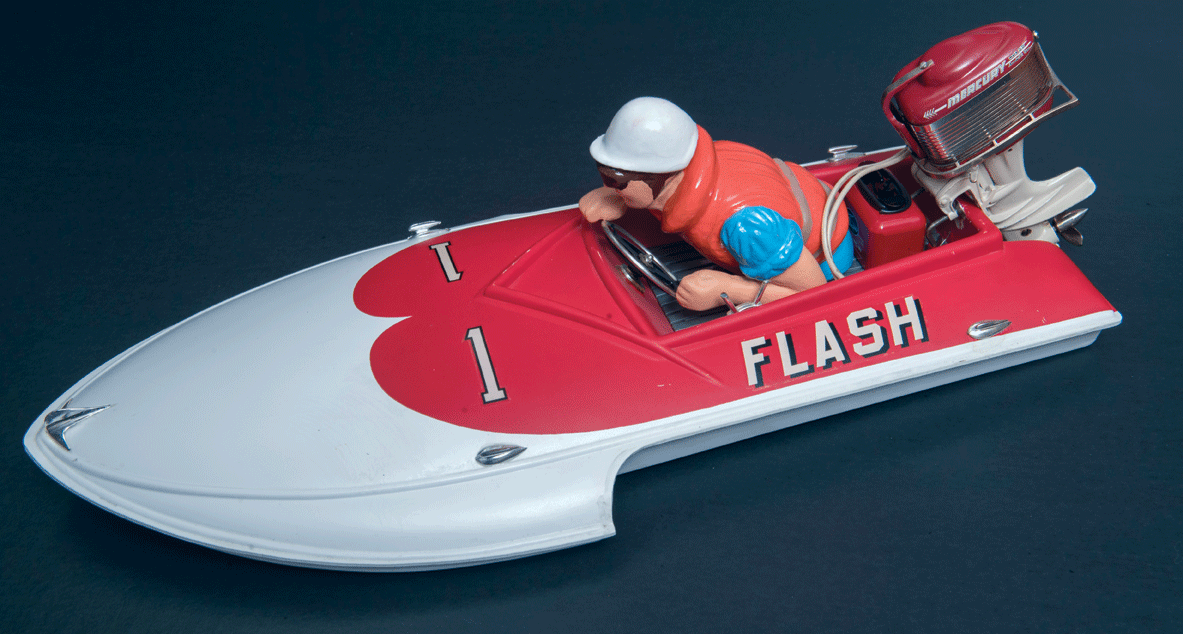 Jack Browning has amassed more than 450 toy boats and motors.

Johnson outboard motors are organized in a display case. 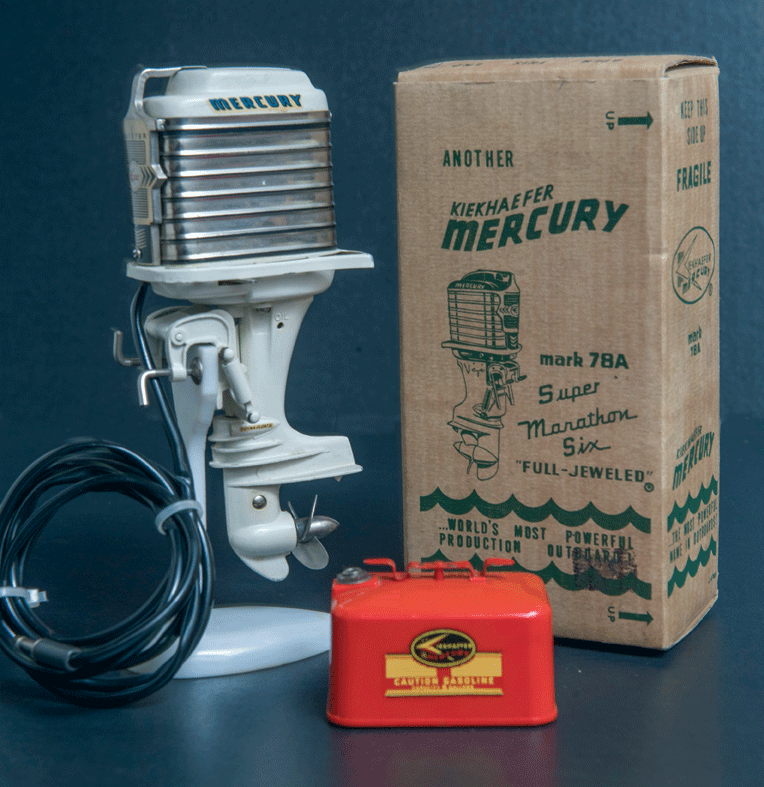 This Mercury motor came packaged with a tiny gas can. 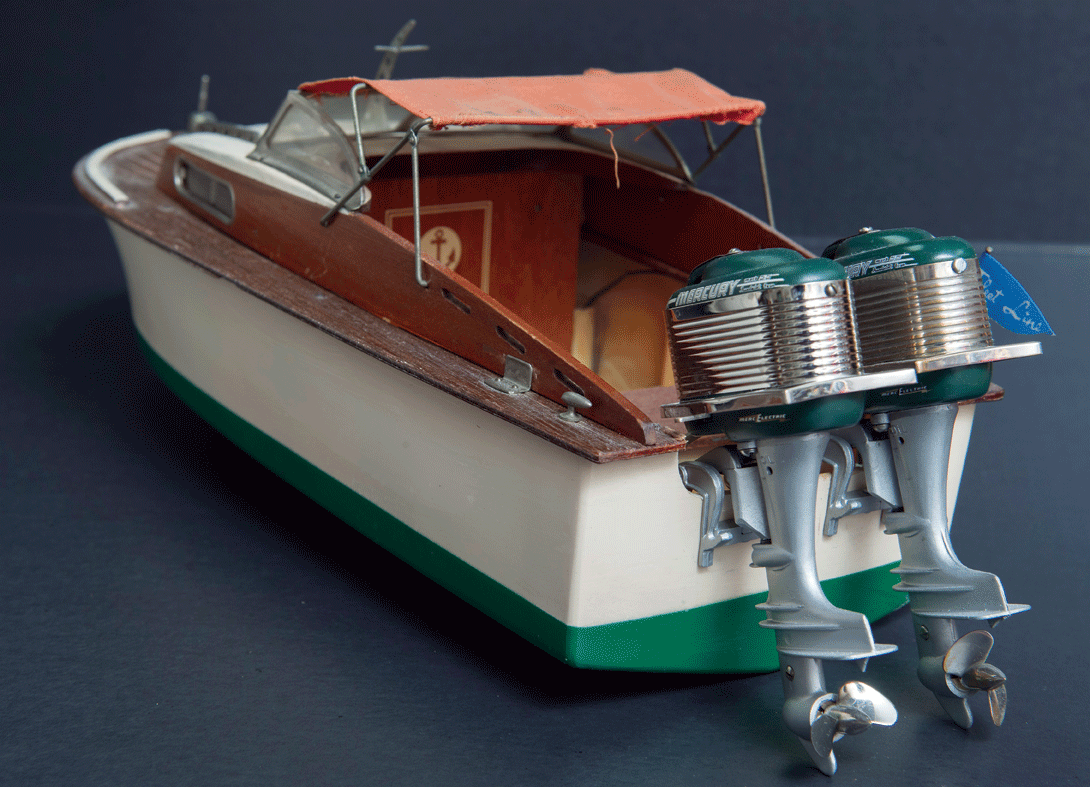 One of Jack Browning’s collectibles is this Fleet Line runabout sporting a pair of Mercs.

When you think of outboard motors, you might think of 150- to 250-horsepower Mercury engines that power bass boats, 85 to 115 Evinrude engines found on vintage pontoons, or newer model tritoons with Yamaha and Honda engines.

And then there’s Jack Browning of Hardy. His outboards are considerably smaller. These are fit-in-the-palm-of-your-hand, battery-powered replicas that mount on 12-inch to 18-inch runabouts, hydroplanes and cuddy-cabin cruisers. Well-known to most of the nation’s roughly 375 collectors of toy boats and outboards, Browning has more than 450 of them displayed in his home — nearly one of every design ever produced.

“I’ve pretty much given up acquiring [any more] because there’s just not much I don’t already have,” Browning said.

Browning’s interest and enjoyment of toy outboards began at age 11 when his parents, who accompanied friends to the New York Boat Show, brought him a 1956 Mercury Mark 55 outboard plus a Fleetline Dolphin model boat powered by a replica 1956 Scott-Atwater. Browning’s family often visited those friends at Flat Top Lake, near Beckley, West Virginia, which is how Browning learned to ski behind engines similar to the ones he collected in miniature form.

With his passion for the boat toys piqued, Browning gradually acquired seven more toy motors that sold at the time for about $6 each.

“I’d save my nickels and quarters till we went to Charleston, the closest place that had them,” Browning said. “Then I’d buy the one that caught my eye.”

Those first eight motors — which Browning’s mom held onto when other childhood toys went to rummage sales — are now displayed together with several Fleetline model boats that were popular at the time. Browning rediscovered them in the late 1970s after they had been packed away in the attic.

“They were in bad shape,” he said. “I had gotten active in Big Brothers [Big Sisters of America], and my little brother had played hard with them. It took some TLC to get them running and looking good, but working on them got me interested in collecting.

“I decided I should own one of every model outboard ever made, and I’m pretty close to that goal. Anything new I find for my collection now is just a color variant of one of the generics.”

Since the really popular boats of the late 1950s ran 40- and 50-horsepower Mercury engines with chrome cowlings covering stacked in-line cylinders, Browning has a bunch of those in his collection.

“Some look much the same, but always differ slightly in horsepower rating, coloration or some other detail,” Browning said.

Only one firm, K&O Fleetline, had acquired rights to use the engine makers’ names on toy motors. While several other companies made generic knock-offs, the K&O originals are what collectors crave. “They’re like the real motors these guys skied behind as kids,” Browning said.

Browning has retained the original packaging for most of his K&O motors — boxes that are replicas of each scale outboard’s shipping carton, sporting original engine brand logos and “This End Up” handling warnings.

One of his most valuable toy engines is a 1960 60-horsepower Gale Buccaneer V-4 which, in full scale, had a cowling the size of today’s 250-horsepower four-stroke engines. Another hot commodity — and worth about $1,500 — is a K&O drink mixer that looks like an outboard engine, complete with a portable fuel tank that holds its batteries.

Alas, production of toy outboards ended in 1962, which Browning attributed to waning interest. “Kids’ interests turned to space toys about then, and the market just evaporated,” he said.

After earning his mechanical engineering degree from Virginia Tech in 1967, Browning settled in Roanoke, working at Appalachian Power for a year, then with Kroger’s store equipment division. After four years there, he and a partner purchased Kessler Refrigeration and specialized in retail refrigeration fixtures for grocery stores in Virginia and seven surrounding states.

That business was sold to an employee seven years ago, and Browning, now 72, retired to a home he had built in 1983 near channel marker R47. He shares his home with partner Anita Hull, whom he calls “the love of my life for the past 12 years.”

Browning recalled one of his first experiences navigating SML. “I first saw the lake in ’67 with two cousins in a 14-foot lapstrake runabout powered by a 35-horsepower Evinrude Big Twin,” he said. “We launched at Crazy Horse, promptly got lost and, until someone told us what the channel markers meant, spent nearly the whole day motoring into cove after cove looking for the way back to the ramp.”

Since that time, Browning has honed his navigation skills. Today he owns a Wellcraft runabout, a pontoon with a full-sized Honda outboard and personal watercraft. He’s also an airplane pilot who holds a multi-engine instructor rating, and co-owns a Beechcraft 180 with several other pilots.

His passions for boating and collecting parallel his love of classic fast cars. He’s owned a couple of Shelby Cobras and 13 Corvettes and currently drives a 1972 Sting Ray 454.

“I guess maybe having so many model outboards is excessive,” Browning said. “Then again, you’ve got to love what keeps you active and interested.”

Jack Browning has a passion for boat motors that can fit in the palm of your hand.

A replica 1956 Scott-Atwater was one of Jack Browning’s first motors.

Jack Browning has amassed more than 450 toy boats and motors.

Johnson outboard motors are organized in a display case.

This Mercury motor came packaged with a tiny gas can.

One of Jack Browning’s collectibles is this Fleet Line runabout sporting a pair of Mercs.