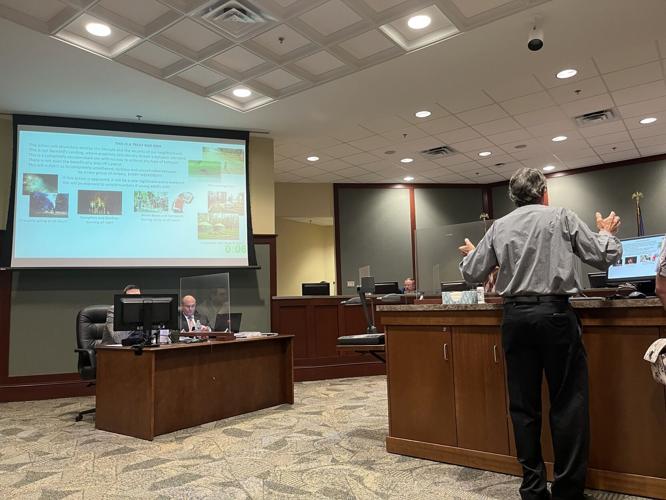 At a July 19 Franklin County Board of Supervisors meeting, a Smith Mountain Lake resident shares a presentation about why the board should deny Hollie Hall's special use permit request for a short term rental. 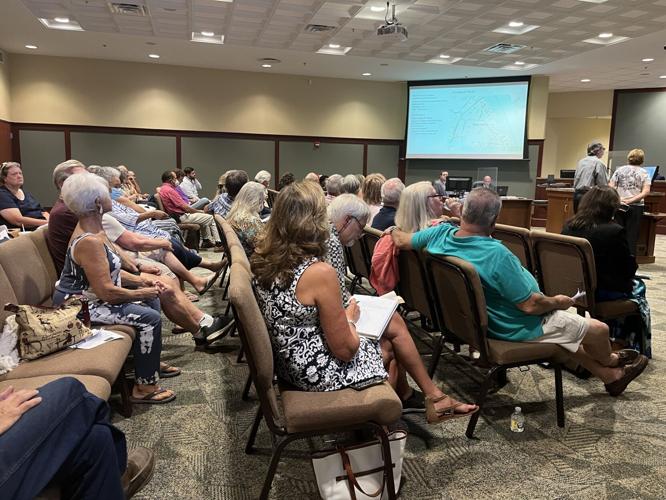 Roughly a dozen neighbors spoke in opposition of Hollie Hall’s special use permit for a short-term rental at a July 19 public hearing. Their main concern was maintaining the private roads in the neighborhood.

Members of a tight-knit Smith Mountain Lake neighborhood may have driven away newcomers over private road maintenance concerns.

With a 5-1 August vote to deny a special use permit request, the Franklin County Board of Supervisors ended two months of back and forth over a possible short-term tourist rental on Smith Mountain Lake in the county’s Gills Creek District.

In June, Hollie Hall appeared in front of the Franklin County Planning Commission seeking a special use permit to use her recently-purchased Smith Mountain Lake house as a short-term tourist rental.

The home in question is located on a 23-acre lakefront property. A privately-owned section of Juniper Road skirts the property’s northern edge. Branching off from Juniper Road is Maggie Lane, which leads through the property and dead-ends as the only way of accessing four nearby homes. Hall said she hoped to use short-term rental income to pay the property’s mortgage until she could sell her existing home and make the lake her full-time residence.

Hall’s request passed the planning commission in June before being struck down by the board of supervisors in August, where board Chairman and Boone District Supervisor Ronnie Thompson was the lone dissenter.

“The private road that is involved here, the maintenance and upkeep of that road, is borne by the citizens as are many of our private roads. ... The residents bought property not anticipating a business use and there’s also a farm here that I struggle with in regard to exacerbating an environment for animals with visitors and tourists,” Gills Creek District Supervisor Lorie Smith said, referring to the nearby horse farm owned and run by Jon and Lisa Dabareiner. “I don’t think that this is harmonious use in this particular case and for those reasons I just don’t support this.”

David Pendleton, who represents the Blackwater District on planning commission, shared a different perspective two months prior when the commission approved Hall’s request in a narrow 4-3 vote.

According to Hall’s neighbors, though, not all of the lake’s roads may be up to that task. Aside from the usual short-term rental concerns about noise, trash and reckless visitors, the residents’ primary flashpoint was the upkeep of the neighborhood’s private roads.

Barbara Spodnick, who lives at the end of Juniper Road, said the gravel road can barely fit two lanes of traffic. She and another neighbor, Shirley Mitteldorfer, worried about visitors unfamiliar with gravel road driving and how they might tear up the road.

“We all have to basically pull over most of the time ... in order to get by,” Jim Lovell, another neighbor, said.

Juniper Road residents share its maintenance costs, but the Dabareiners do most of the actual maintenance because he’s the only resident with the right equipment.

“My wife and I have the machinery to keep the road up. We’re the only ones the last 30 years that have had the machinery,” Jon Dabareiner said. “This is going to add to our burden because of more traffic. This person ... has not made any attempt to offer any help, any compensation.”

Hall seemed blindsided by her new neighbors’ comments and nearly withdrew her permit request on the spot.

“I really had no idea what I was getting into tonight. This has really been quite eye opening. ... If we have an entire community full of people who have already passed judgement ... I don’t foresee this moving forward,” Hall said.

She said no neighbors had approached her with concerns about the road.

At a July board of supervisors public hearing on the request, Hall’s husband Todd Nelson said Hall felt bullied at the June meeting, but ultimately decided to see the permit request through to the end. Nelson and Hall seemed open to some sort of agreement with the neighbors.

“We had no clue that there were this many problems with the road. ... It seems like the road is a huge issue for a lot people, but we need the road open to get ... to the house,” Nelson said. “We’ll take care of the road.”

As for the actual impact of rental traffic on the roads, Heather Turner — Hall’s realtor and a resident of an adjacent subdivision — pointed out that tractor trailers regularly use the same stretch of Juniper Road to reach Dabareiner’s horse farm.

In June, Turner said it was a shame the community couldn’t come together on a solution.

“We did,” said one of the neighbors from the audience.

Betty White's estate up for auction

Betty White's estate up for auction

At a July 19 Franklin County Board of Supervisors meeting, a Smith Mountain Lake resident shares a presentation about why the board should deny Hollie Hall's special use permit request for a short term rental.

Roughly a dozen neighbors spoke in opposition of Hollie Hall’s special use permit for a short-term rental at a July 19 public hearing. Their main concern was maintaining the private roads in the neighborhood.