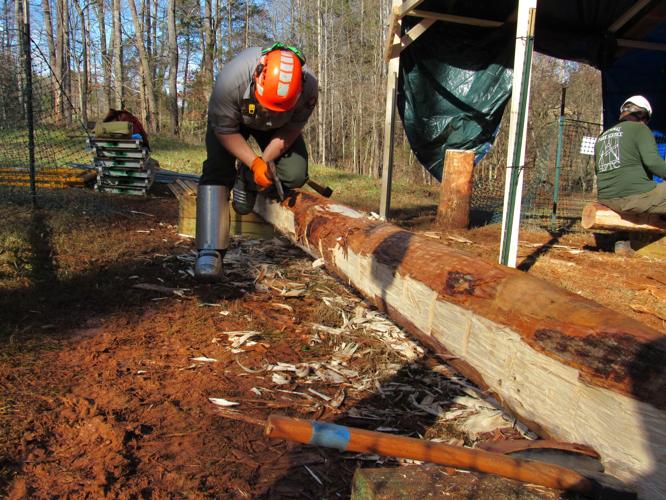 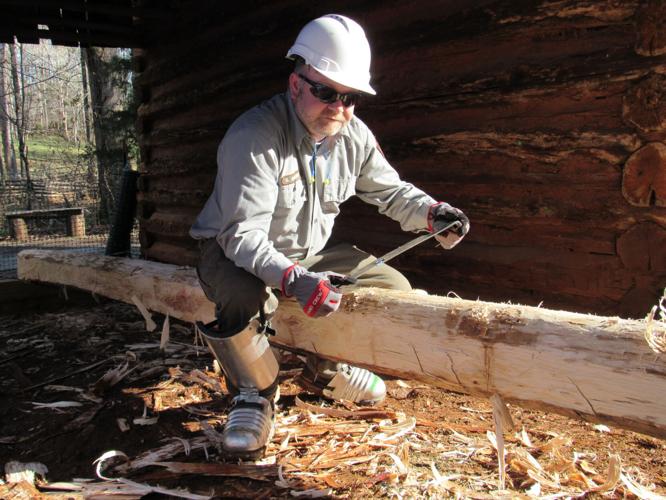 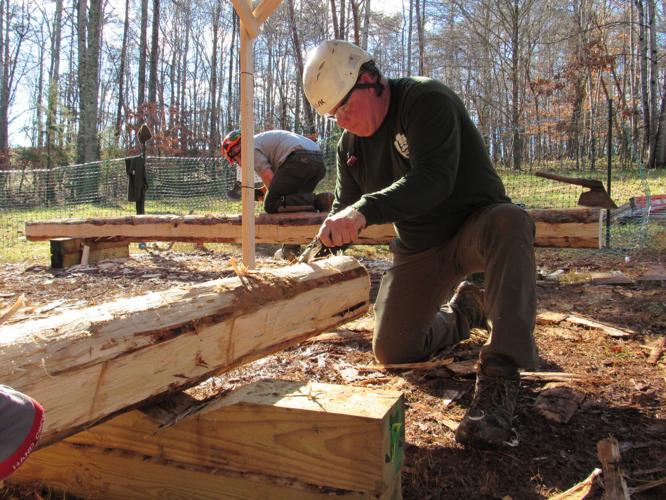 Mike Cardis uses a draw knife to remove bark and sap from the logs. 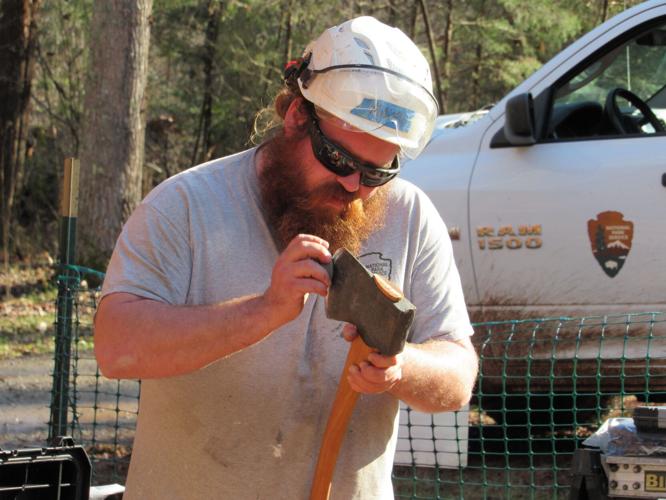 The tobacco barn along the Jack-O-Lantern Trail is the oldest remaining structure at Booker T. Washington National Monument. Built in 1894, it has a long and storied history at the former plantation.

In the last 128 years, the barn has required some upkeep to assure it remains a part of the park. The goal of the current work by the National Park Service is to assure that the necessary upkeep is done with as little impact as possible and using techniques that are similar to the ones used when it was first built.

“There are a few logs that need to be replaced,” said Tim Sims, senior ranger at Booker T. Washington National Monument. Work will also include repairs to the barn’s shed and roof.

Michael Spencer, a professor from the University of Mary Washington in Fredericksburg, visited the park last year and spent several days doing a detailed inspection of the barn to see what needed to be replaced. He was able to find out which logs were damaged due to rot or other factors and what varieties of trees were used to construct the barn.

The barn was found to consist of white oak, locust, ash and pine logs. All could be found in the surrounding woods during the time of the barn’s construction.

Works from the National Park Services’ Historic Preservation Training Center are using oak logs for the repairs. The spent several days earlier this month hewing logs to prepare them to be replaced on the barn. Hewing is a technique used during the time of the barn’s construction.

“What we are trying to do is replicate the logs that are rotten,” said Mike Turner, project leader.

The hewing process involves trimming the log to remove excess bark as well as flattening the sides of the log to allow for a more sturdy fit into the barn. Once the logs are in place, chinking is done to fill any cracks between the logs.

Chinking is the mud mixture that can be seen between the logs in many old tobacco barns and other types of log structures.

Turner said they only expect to remove eight logs from the barn right now based on what was found during inspections last year. “We might find an extra one the needs replacing,” he said. “It’s like opening a can of worms.”

The work earlier this month is only the first phase of the project. The goal was to hew the logs to make sure they are ready to be replaced on the barn. Turner said they didn’t have enough time before it gets too late in the season to continue.

Work is expected to continue sometime in the spring.

Why you should consider booking multiple hotels while one vacation

Mike Cardis uses a draw knife to remove bark and sap from the logs.