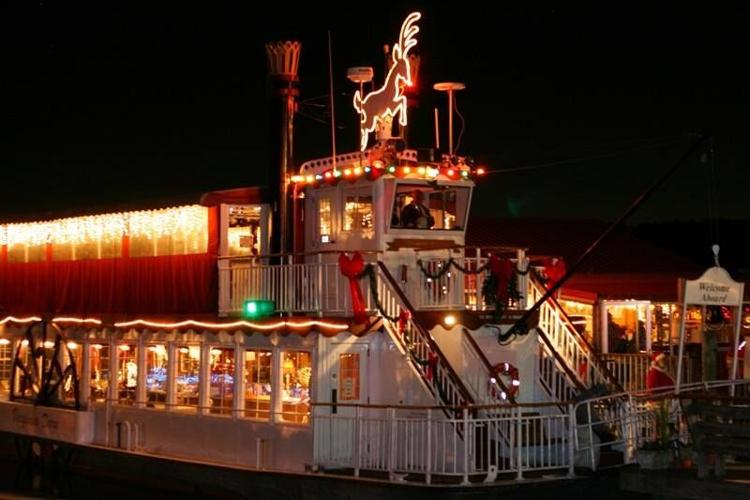 The Virginia Dare is strung up with Christmas lights in anticipation for this Saturday’s Lighted Boat Parade. 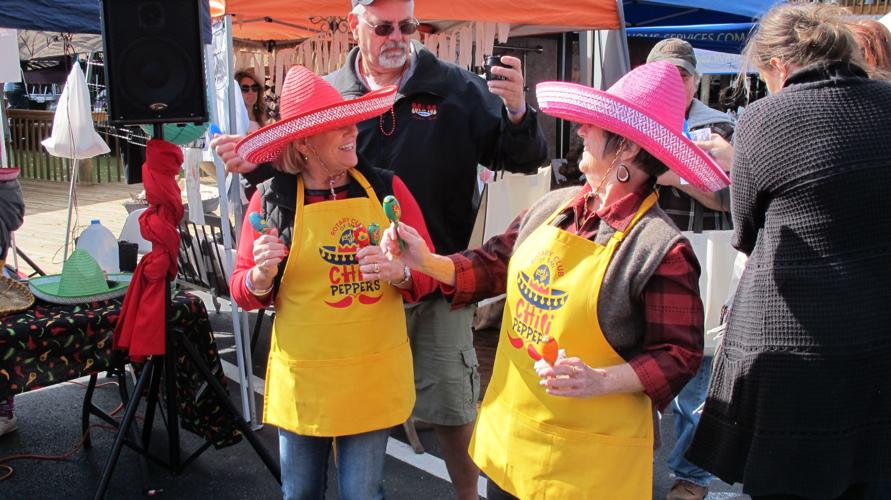 Charlene Jones (left) and Shirley Sorrentino dance with maracas in front of the Rotary Club of Smith Mountain Lake booth at the chili festival in 2017.

Smith Mountain Lake will have two popular events for local residents this weekend. The annual SML Chili Festival at Bridgewater Plaza and the Virginia Dare’s Lighted Boat Parade are expected to bring in some crowds.

There has already been a lot of interest in this year’s SML Chili Festival. Erin Stanley, member relations and events director for the SML Regional Chamber of Commerce, said this year’s festival is maxed out with 38 craft vendors as well as 15 teams competing with their best chili recipe.

“We are completely sold out of space,” Stanley said.

With crowds more eager to return to events as COVID-19 numbers die down, Stanley said the chamber expects more than 2,000 visitors during the day of the festival. “As long as the sun’s out, I think we are going to have a great event,” she said.

Bands will be playing during the festival set for 11 a.m. to 4 p.m at Bridgewater Plaza. There is a $7 admittance fee to the festival and samples each of the team’s chili.

Trophies for the event’s best chili judged by several local chefs will be announced at 3:30 p.m. as well as the award for People’s Choice and Best Showmanship chosen by festival goers.

Later that evening at the Virginia Dare Marina boats will be setting off for the annual Lighted Boat Parade. The event has picked up in popularity in the past few years after nearly dying out.

The parade had dropped in participation to only around 5 or 6 boats in 2016 before slowing coming back due to efforts of new owners. They moved it to earlier in the year to get more participation from the public. Marina co-owner Garret Meyer said a lot of potential participants had already winterized their boats when the event was held in December.

With the change to the first weekend in November, the parade is now a sort of kickoff to Christmas for the lake community. It has also seen an increase of nearly 40 boats in recent years.

“This year we are trying to get over 50 boats,” Meyer said.

The event also provides toys and winter jackets for are children in need. Participants and visitors to the marina for the parade are encouraged to bring jackets and toys to the marina that will be distributed through a partnership with the Smith Mountain Lake Marine Volunteer Fire Department.

Meyer said anyone interested in participating in the parade can come by the marina by 6 p.m. on Saturday evening. There will be a brief captains meeting before the boats head out at 7 p.m.

“Any boat can join,” Meyer said. “Even if it is just decorated with a Christmas wreath.”

The Virginia Dare is expected to reach the Hales Ford Bridge at 8 p.m. and turn back to the marina. Meyer said there as been a growing crowd of spectators at the docks behind the Bridgewater Condominiums in recent years. He expects more than 100 this Saturday.

“This in an event to get everyone in the holiday spirit,” Meyer said.

The Virginia Dare is strung up with Christmas lights in anticipation for this Saturday’s Lighted Boat Parade.

Charlene Jones (left) and Shirley Sorrentino dance with maracas in front of the Rotary Club of Smith Mountain Lake booth at the chili festival in 2017.