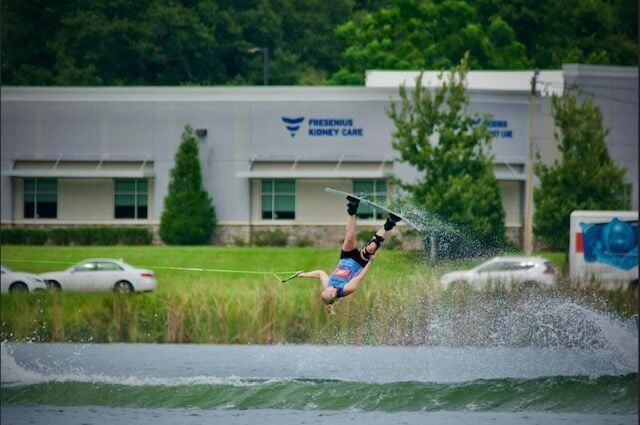 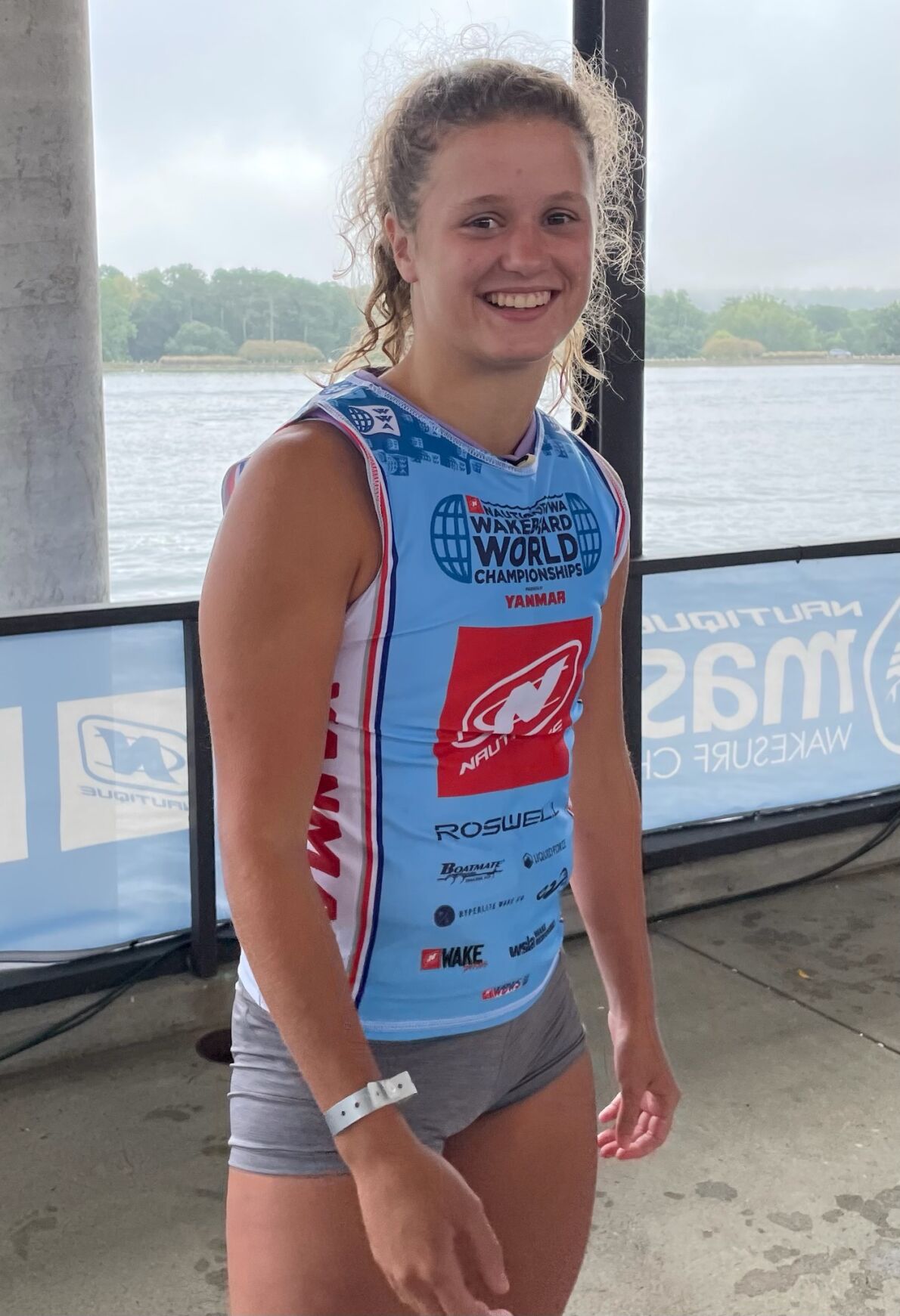 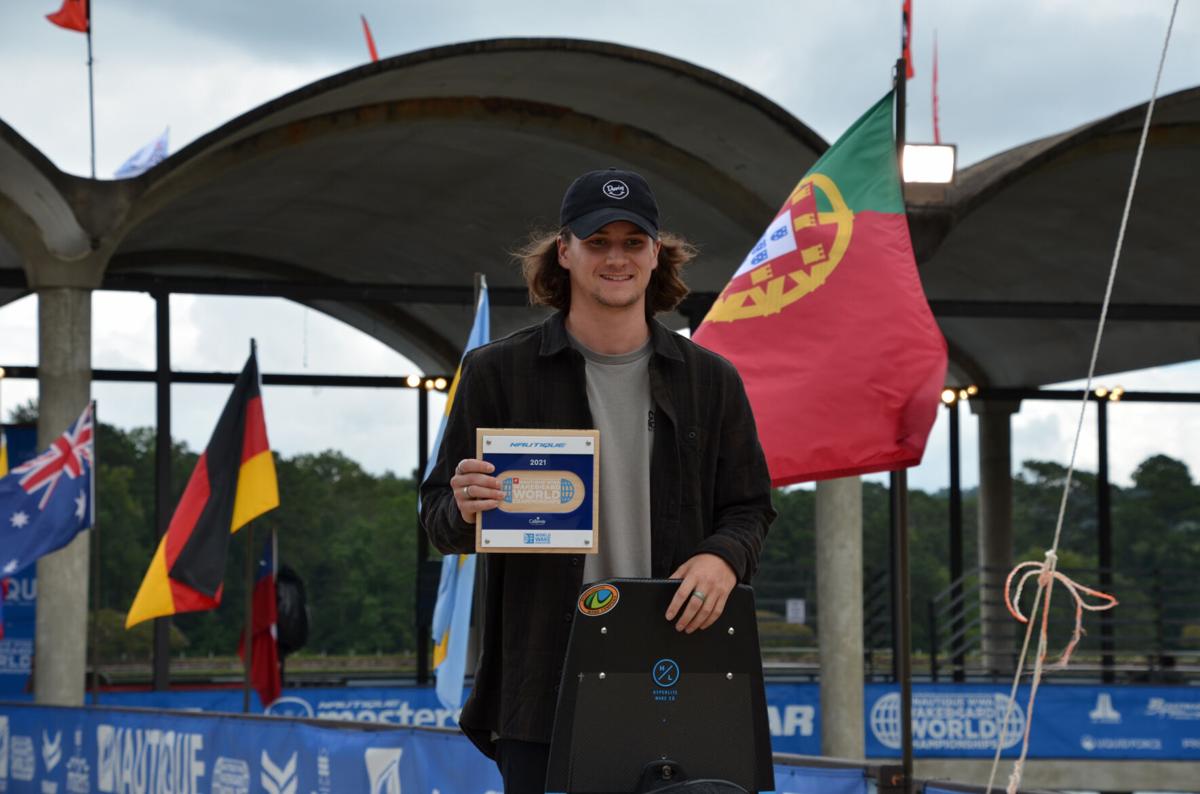 Blake Jones grew up here and placed third in the men’s division at the same competition. Ashley Kazmer vacations and trains at the lake and placed seventh.

Kazmer competed in the Junior Pro Women’s division, this was the first year it was offered. She just started competitive wakeboarding last year, but she has been water skiing since she was around 4 years old and started wakeboarding at the ripe age of 7.

“I’ve always been on the water,” said Kazmer. “I love it. I’ll wake up at 7 a.m. every morning and train throughout the day because I love it. I love setting goals and achieving them.”

The high school sophomore does not train as much in the fall and winter because she plays travel and high school soccer. “I’m going down to Florida during Thanksgiving to train [in wakeboarding] and will go in the winter was well.”

In the Women’s Junior Pro class there were nine competitors this year. To get there you must do well in regionals and nationals. This year Kazmer who lives in Carey, North Carolina, won regionals and placed fourth in nationals.

Blake Jones grew up in the Hardy area and calls Westlake his stomping grounds. While he lives in Florida now, the 21-year-old comes back in the summer to train at Smith Mountain Lake and give lessons.

Jones placed third in Men’s One Division. “We’re all right below pro level,” said Jones. “We are all the same age and we’re all going after the same thing. One of the kids in my division, my roommate, he came in first and I came in third. It was cool to stand on the podium with him. At the end of the day, we are all friends and support each other and look out for each other. It’s pretty cool.”

“I actually hated the water until I was about 8 and wouldn’t do anything on it,” continued Jones. “I wouldn’t even get in it. It started when I was about fourteen, dad got me on the water and since then I have been training and I come back every summer.”

Of the three, 48-year-old Joy Manning has the most experience. This was her 11th time competing at worlds and her ninth title. She gets excited talking about her two younger proteges and their connection to Smith Mountain Lake. This year Manning rode in memory of two people close to her.

Her stepfather-in-law, Gary Wetterberg, was a retired International Forestry Support Program manager of the U.S. Department of Agriculture’s U.S. Forest Service. Russell Hitt, chairperson emeritus of Hitt Contracting Inc., influenced Manning when she worked with him for 14 years before moving to Smith Mountain Lake full time. She is now Director of Renovations at Virginia Tech.

“Russel was old school construction if you didn’t get up with the chickens you were late,” remembered Manning. “He actually went into buildings and tore things off the wall if it wasn’t up to his standards.”

The two men continue to inspire her as does wakeboarding itself.

“It’s a great sport,” continued Manning. “It’s something that keeps me working out and staying healthy. I work every week so I can get out on the boat every weekend and enjoy the lake. I am an early riser so basically; I get out on the lake and am done before the vacationers get on the water.”

Waking boarding inspires goal setting for all three. Manning wants to win another world title when she is fifty.

“Every season I create a trick list and check them off as I learn them,” said Kazmer. “If one trick is not working for me, I just go on to another. And that’s what I love about this sport, there are always more tricks to learn.”

“Nothing compares to learning a new trick or standing on the podium,” added Jones. “It’s just a lot of fun. The journey and the friends you make a long the way, the sense of accomplishment. I told myself I don’t want to wake up every morning and do what I don’t want to do. I want to enjoy what I do. Life is too short.”

US surgeons successfully attach pig kidney to a human

US surgeons successfully attach pig kidney to a human

Franklin County is taking its first steps toward updating the village plan for the Union Hall community. The plan will guide development in th…

The Booker T. Washington National Monument has been utilizing a natural resource over past several months. Not water or wind power, but the br…

The return of cooler weather means just one thing: Colorful autumn leaves are on the horizon. The fall foliage colors in Northeast Tennessee and Southwest Virginia may peak by the third week of October this year — about a week ahead of normal.

Fishing is good. The water temperature has begun to fall the past few days. Baitfish are starting to move to shallow water. Top water fishing …

Sitting in court Sept. 21, Neil Anthony Spencer’s voice broke as he told a judge how much he had tried to live a better life after serving 18 …

Franklin County’s first roundabout on a state road opened to traffic on Saturday. Vehicles traveling along Virginia 122 south of Westlake are …